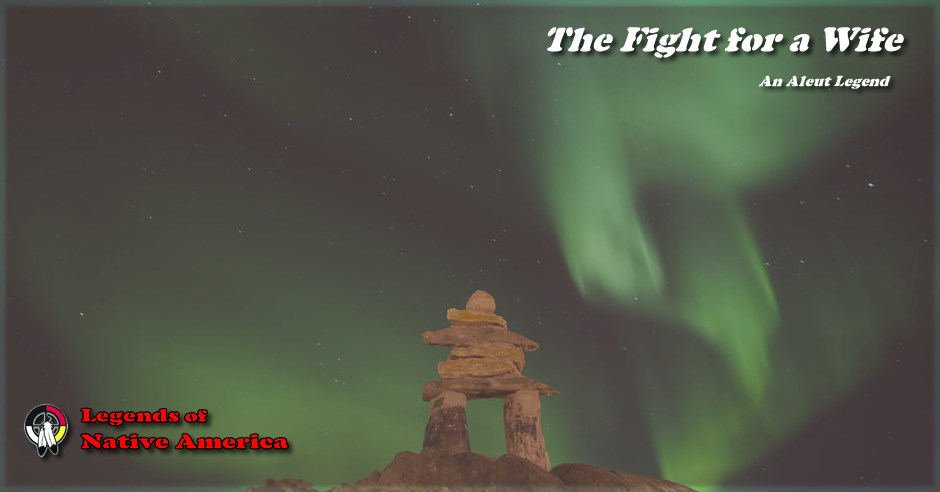 Once upon a time there was a boy who lived all alone, far from other people. He had a habit of lifting stones, at first small ones, then larger and larger ones as he grew and became stronger. When he was old enough to marry, he decided to go out in the world to get a wife, peaceably if he could, but if not, then by fighting for her. After several days' paddling, he came by night to a village. In one hut he saw a light, so he went there and found a young girl who gave him something to eat and a place to sleep. The whole village heard that a stranger had arrived. Soon an old man presented himself and shouted through the window of the hut: "Our champion would like to try his strength with the new arrival." The girl explained the meaning of the challenge to the young man and advised him to accept.

The first test consisted of a hunt for beluga. Watched by all the people, the village champion and the stranger went off, each in his own boat. In the evening when they returned, it was the newcomer who had killed the largest number of the animals and was declared the winner.

On the following day another challenge was delivered in the same manner. This time the contest was a boat race around a large island facing the village. When the rivals met on the beach, their bidarkas (boats) were side by side. Between them was placed a bow and arrow, to be used by the victor on the vanquished.

The two men got away together, and for a time the contest was in doubt as first one and then the other took the lead. But as the race progressed, the local champion gradually drew ahead of his rival until they lost sight of one another. So certain of the outcome were the old men on the shore that they did not even stay to see the finish. But the newcomer spoke to his boat, which was made of beluga skin, and commanded it to change into the beluga, swim under the water, and overtake the other boat. When the young man was close to shore, he and his boat came up, assumed their usual shapes, and landed. When the local champion had lost sight of his rival, he had slowed up because he felt certain of victory.

Great was his astonishment and fright when he saw the young stranger on the beach with the bow in his hand. He had little time to think, for the twice-victorious hero shot him. While the hero was eating supper at the young girl's home, an old man came to ask him to go to the beach and withdraw the arrow from the defeated champion, since no one else could do it. The newcomer went to the beach and pulled the arrow out, and the villager became well again.

On the evening of the third day, the young man was challenged once more, this time to a wrestling match in the village Large House. In it's center was a fenced-in pit containing many bones and shaman worms. The victor was to throw his opponent into the pit, where the worms would eat him. Life, love, glory hung on the outcome, and both men fought hard and long. In this contest the young man's strength, derived from lifting stones, proved decisive. With a skillful movement he picked the local champion off his feet and heaved him into the pit, and the village declared the young man to be the new village champion. He went to the home of his defeated rival to claim the spoils of war, which included two wives, furs, and all the luxurious possessions of a rich man.