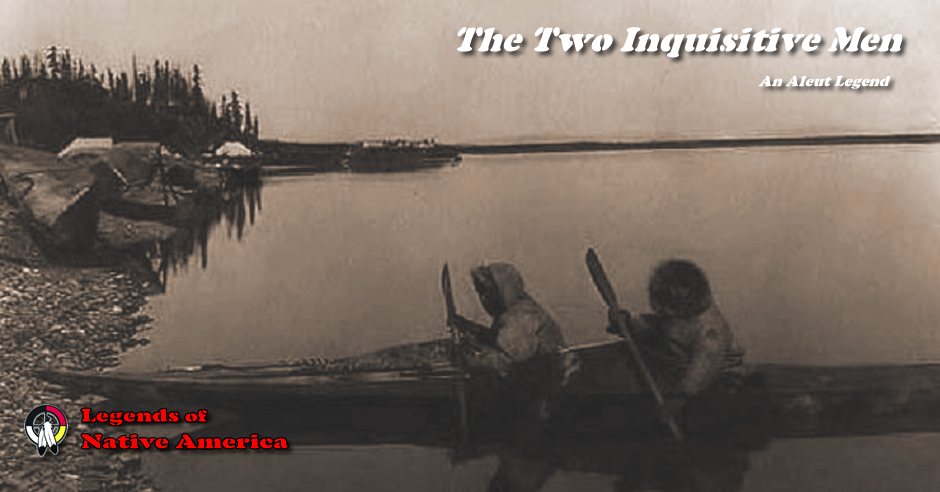 There were two men in the old days by the names of Acha-yuongch and Ach-goyan. They lived together, but spoke and looked at each other only when they were compelled to do so. They were curious about anything happening nearby and they usually went to investigate.

One day, as they were sitting in their barrabara around the fire, their backs toward each other, eating shellfish, Ach-goyan pulled out a feather from his hair, threw it in front of him and said, "Acha-yuongch, what shall we do? There is a man living over there on the other side of the village. He hunts every day with his sling."

Acha-yuongch was silent for a while, then he scratched his ear and said, "I do not know what is the matter with me. There is much whistling in my ear."

Silence followed for some time, then Ach-goyan pulled out another feather from his hair and threw it up in front of him and said, "Acha-yuongch, what shall we do? There is a man living over there who hunts every day with his sling."

Acha-yuongch again replied, "There is very much whistling in my ear." A third time Ach-goyan threw a feather into the air and said, "There is a man living on the other side whose name is Ploch-goyuli. He hunts every day with his plochgo (sling). Let's go and see him." So they prepared for the trip, piling their barrabara and all their other possessions on their canoe, including the grave with the remains of their wife.

But on launching, they discovered that the load was too heavy on one side. So they dug up a small hillock and placed it on top to equalize their load. They filled hollow reeds with fresh water and started on their trip. When they arrived on the other shore they saw Ploch-goyuli hunting ducks with his sling. He saw them, too, and knew the nature of their visit, so he threw rocks at them. The first rock hit close to the canoe. Ach-goyan exclaimed, "Ka! Ka! Ka! It nearly hit me."

The second rock hit closer, and he exclaimed louder, "Ka! Ka! Ka!" Rocks kept coming, and they turned their damaged canoe around and headed homeward, where they replaced their barrabara and all of their things.

A few days later, sitting around the fire in their barrabara, Ach-goyan pulled out a feather from his hair, tossing it in the air and said, "Let's visit the man on the island who heats a bath and catches codfish every day."

"My ear is still whistling," replied Acha-yuongch. After tossing another feather into the air, Ach-goyan said, "Let's visit the man living on an island in the middle of the sea, who heats his bath and catches codfish every day. His name is Peting-yuwock."

Again they loaded the canoe with all of their things and started off. They reached the island, beached their canoe, and went to the old man's barrabara. He cried out, "Where is the man-smell coming from?"

"We came to visit you because we heard you heat your bath and catch codfish every day."

"The hot bath is ready," said Peting-yuwock and directed the two inquisitive men to it. While they were bathing, the old man tied together a lot of thin, dried kelp, which he had kept to make clothes. Out of it, he made a long rope and fastened one end of it to the canoe. He then roasted a codfish and gave it to the two men after their bath.

"There is a strong wind blowing. You had better hasten to your barrabara before it becomes too strong," suggested the old man.

The two men heeded his warning and shoved off into the sea. When they were about halfway across, the old man pulled the rope and brought the two men back to his shore. He came out and called to them, "Why have you come back. I warned you how strong the wind was."

Again the two men started off, and again were halfway home when the old man pulled on the rope and hauled them back to the beach. "Why are you back here? Get on with you or you will never make it," he shouted at them against the wind.

The third time when the old man pulled on the rope, it broke, and the canoe upset and the two men were lost with all of their belongings.

The grave of their wife became a beautiful porpoise. Acha-yuongch and Ach-goyan were cast upon the shore, where they became two capes of land, jutting into the sea like two peninsulas.

They had been so inquisitive about everything that they became prominent landmarks, two safe harbours for fishermen and others at sea, forever.