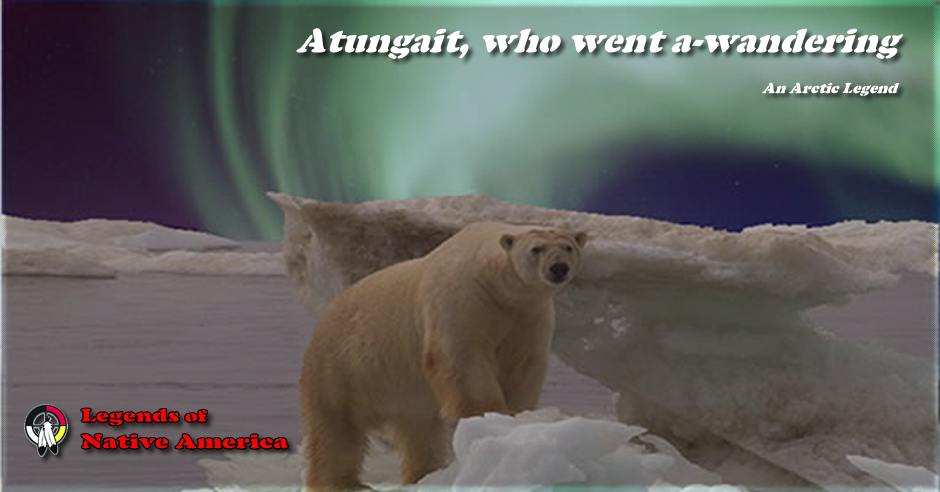 ATUNGAIT, that great man, had once, it is said, a fancy to go out on a sledge trip with a strong woman.

He took a ribbon seal and had it flayed, and forbade his wife to scrape the meat side clean, so that the skin might be as thick as possible. And so he had it dried.

When the winter had come, he went out to visit a tribe well known for their eagerness in playing foothall. He stayed among them for some time, and watched the games, carefully marking who was strongest among the players. And he saw that there was one among them a woman small of stature, who yet always contrived to snatch the ball from the others. Therefore he gave her the great thick skin he had brought with him, and told her to knead it soft. And this she did, though no other woman could have done it. Then he took her on his sledge and drove off on a wandering through the lands around.

On their way they came to a high and steep rock, rising up from the open water. Atungait sprang up on to that rock, and began running up it. So strong was he that at every step he bored his feet far down into the rock.

When he reached the top, he called to his dogs, and one by one they followed by the way of his footsteps, and reached the top, all of them save one, and that one died. And after that he hoisted up his sledge first, and then his wife after, and so they drove on their way.

After they had driven for some time, they came to a place of people. And the strange thing about these people was that they were all left-handed. And then they drove on again and came to some man-eaters; these ate one another, having no other food. But they did not succeed in doing him any harm.

And they drove on again and came to other people; these had all one leg shorter than the other, and had been so from birth. They lay on the ground all day playing ajangat.And they had a fine ajangat made of copper.

Atungait stayed there some time, and when the time came for him to set out once more, he stole their plaything and took it away with him, having first destroyed all their sledges.

But the lame ones, being unable to pursue, dealt magically with some rocky ridges, which then rushed over the ice towards the travellers.

Atungait heard something like the rushing of a river, and turning round, perceived those rocks rolling towards him.

"Have you a piece of sole-leather?" he asked his wife. And she had such a piece.

She tied it to a string and let it drag behind the sledge. When the stones reached it, they stopped suddenly, and sank down through the ice. And the two drove on, hearing the cries of the lame ones behind them:

"Bring back our plaything, and give us our copper thing again."

But now Atungait began to long for his home, and not knowing in what part of the land they were, he told the woman with him to wait, while he himself flew off through the air. For he was a great wizard.

He soon found his house, and looked in through the window. And there sat his wife, rubbing noses with a strange man.

"Huh! You are not afraid of wearing away your nose, it seems." So he cried.

On hearing this, the wife rushed out of the house, and there she met her husband.

"You have grown clever at kissing," he said.

Then Atungait grasped her roughly and killed her, because she had lied.

The strange man also came out now, and Atungait went towards him at once.

"You were kissing inside there, I see," he said.

"Yes," said the stranger. And Atungait let him live, because he spoke the truth.

And after that he flew back to the strong woman and made her his wife.