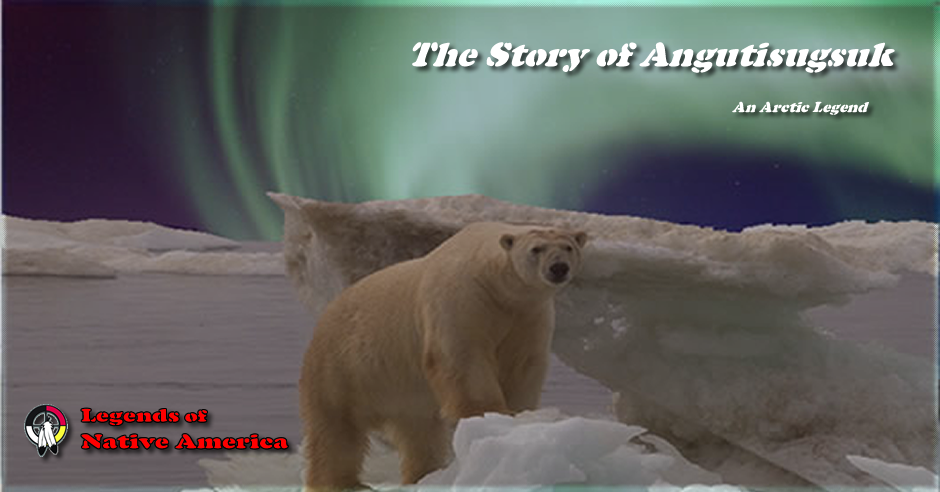 There were three brothers, the eldest of whom was called Angutisugsuk. They had never lived apart; and all of them were clever hunters, especially Angutisugsuk.

One winter the weather was dreadfully severe, and all the neighbors were in great want. Only the three brothers had enough to spare, and the others claimed their assistance. It so happened that two old men came to them with that intention; and during their visit the wife of Angutisugsuk remonstrated, saying that they were having rather too many visitors about the place, at which the old men quickly took offence; and in spring-time, when Angutisugsuk's family left their winter-quarters, and were away on some long excursion, they visited the place in their kayaks, entered the empty house, and practiced all manner of sorcery and witchcraft upon the wall adjoining the ledge occupied by Angutisugsuk's wife, in order to produce discord among the family when they came back from their travels. In autumn they all returned to the old house as usual.

One day Angutisugsuk did not go out "kayaking", but stayed at home to make a wooden plate and spoon. At that time he had got two wives, both of whom were very clever at needle-work; and he offered to give her who would mend his fur jacket for him the wooden plate and spoon. The first wife made answer, before the second could put in a word, "I want to have them - I will mend the jacket;" and she worked very quickly on it. The second wife, however, who happened to be the best beloved, on her part became envious, and got into a passion.

Perceiving this, the husband struck her, because of her having borne him no children. At this his youngest son began crying; and seeing it, the child's uncle fell upon the father, who was still ill-treating his second wife. In this fight Angutisugsuk thrust his brother against the door-sill with such force that his thigh-bone was bruised; and he would have followed up his advantage over him but for the younger brother and some others, who interfered in the quarrel. Thus it came to pass as the old men had planned when they went and bewitched the empty house in their absence.

After having lamed his brother, Angutisugsuk next day loaded his boat and went off in it, taking a small roofless house for himself which he found a little north of his former station; and as a substitute for roof-beams he made a shift with his tent-poles. His proper wife he left behind, and only took the second one along with him. Seeing that his brother was now able to stir, he resolved to kill him, and repeatedly returned to despatch him; but somehow he always found his younger brother or his nephew by his side, and never succeeded in accomplishing his end. These two watched the sick man by turns; and only one at a time went out in his kayak.

Angutisugsuk one day encountered his nephew at sea, and resolved to pursue him; but as soon as they came within sight of the house on shore, he left off and turned back. When the nephew got home, he told them that Angutisugsuk had been persecuting him; and his father (viz., the invalid) said, "Tomorrow thou must go and ask our neighbors to assist us in getting Angutisugsuk out of the way, because he has gone raving mad; but two or three men will not suffice, for he is immensely strong himself."

The son went the following morning to several stations, and brought a considerable party of "kayakers" along with him; and the invalid accosted them, saying, "Let us agree to kill Angutisugsuk. Every day he comes this way intending to take my life; but as soon as he sees anybody staying with me, he desists and turns back."

All the men prepared to pass the night there, hiding their kayaks behind the house; and early in the morning they saw Angutisugsuk in his kayak emerging from behind a rocky point close by. As nobody was to be seen, and he did not even observe the kayaks of his brother and nephew, he supposed them to be off, and made for the shore as fast as possible. An old man among the strangers now drew his hood closer to his head, and pronounced a magic spell, adding that, if it were likely to succeed, Angutisugsuk as a sure sign would turn the back of his hands downwards, instead of using the palms in ascending the beach.

Watching him very closely, they noticed that he did as the old man had foretold, and they no longer had any doubt of their success. Having got out on the beach, he only drew his kayak half-way out of the water, and went straight up to the house as if to enter it at once; but be-thinking himself of something, turned back to the large boat to get hold of a flensing-knife, and then proceeded to the entry. The men were all reclining on the side-ledge couches except two, who stood posted at the inner entrance ready to seize him.

When he saw his brother sitting on the main ledge, he addressed him in the following words, saying, "Here is a brave man for thee! I'll show thee the way to fight! Didst thou really believe I did not intend to kill thee?" Thus speaking, he advanced a step or two, but was soon seized by the two men, and quickly disarmed. He was at once conducted outside, where all the rest fell upon him; but nobody could manage to overthrow him.

At last, when they had got him hamstrung, he fell; whereat they seized him, and held a council as to which of them should first stab him. At last the invalid brother was carried out, in order that he might finish him off. They put him down close beside the other, and he said, "Go and fetch me my spear from under the boat." When he had got it, he lanced his brother several times in the shoulder, saying, "Now let go your hold; if he boasts himself a man, he will be sure to rise."

He did get up, and went towards his kayak on the beach, but fell down dead before he reached it. Then the surviving brother exclaimed, "Alas! we have killed him who did well towards us. In the short, dark days, when we were almost starving, he did not mind toiling away for us. I am sorry indeed: now do kill me also!" He asked his brother, his son, and all the other men; but finding that nobody would do it, he said, "Well, then, go and fetch his second wife, and kill her at any rate; it was she who began it all." They did so; and the person who slew her admonished the bystanders, saying, "Now put together all her things, and all her clothes, all her jackets of reindeer-skin, her breeches and boots of seal-skin - get them all together, and carry them along with her; and mind you close up the burial-place well, and heap plenty of stones on top of it." Later on, when the invalid recovered, he felt great remorse for his act of violence; but the old magician was quite satisfied that Angutisugsuk should have been killed by his brother.