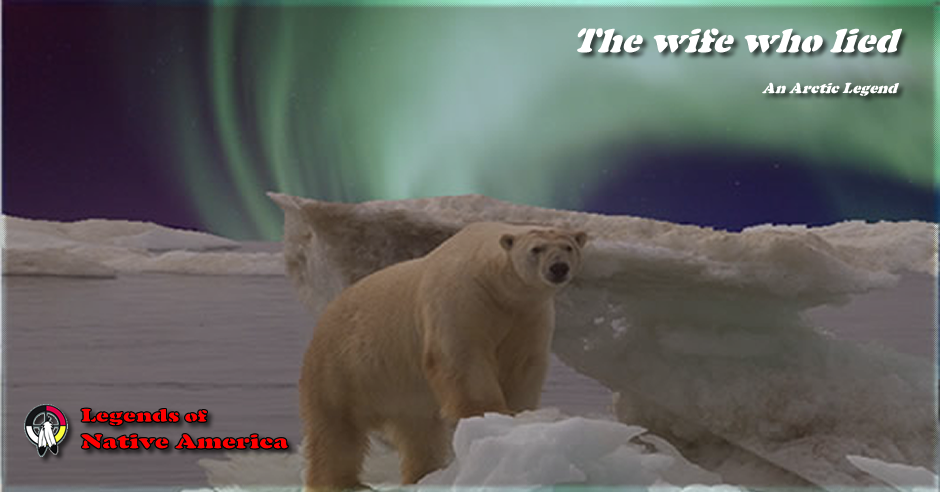 NAVARÁNÂPALUK, men say, came of a tribe of man-eaters, but when she grew up, she was taken to wife by one of a tribe that did not eat men.

Once when she was going off on a visit to her own people, she put mittens on her feet instead of boots. And this she did in order to make it appear that her husband's people had dealt ill by her.

It was midwinter, and her kinsfolk pitied her greatly when they saw her come to them thus. And they agreed to make war against the tribe to which her husband belonged. So they set out, and came to that village at a time when all the men were away, and only the women at home; these they took and slew, and only three escaped.

One of them had covered herself with the skin which she was dressing when they came, the second had hidden herself in a box used for dog's meat, and the third had crept into a store shed. When the men came home, they found all their womenfolk killed, and at once they thought of Navaránâpaluk, who had fled away. And they were the more angered, that the slayers had hoisted the bodies of the women on long poles, with the points stuck through them.

They fell to at once making ready for war against those enemies, and prepared arrows in great numbers. The three women who were left alive plaited sinew thread to fix the points of the arrows; and so eagerly did they work that at last no more flesh was left on their fingers, and the naked bone showed through.

When all things were ready, they set out, and coming up behind the houses of their enemies, they hid themselves among great rocks. The slayers had kept watch since their return, believing that the avengers would not fail to come, and the women took turns at the watching. And now it is said that one old woman among them had a strange dream. She dreamed that two creatures were fighting above her head. And when she told the others of this, they all agreed that the avengers must be near. They gathered together in one house to ask counsel of the spirits, and when the spirit calling had commenced, then suddenly a dog upon the roof of the house began to bark.

The men dashed out, but their enemies had already surrounded the house, and now set about to take their full revenge, shooting down every man with arrows. At last, when they were no more left, they chose themselves wives from among the widows, and bore them off to their own place. But two of them took Navaránâpaluk and hurried off with her.

The men laughed, and made no answer, but ran on with her. Then suddenly they cut through both her arms with their knives. And soon she fell, and the blood went from her, and she died.

This fate they meted out to her because she lied.