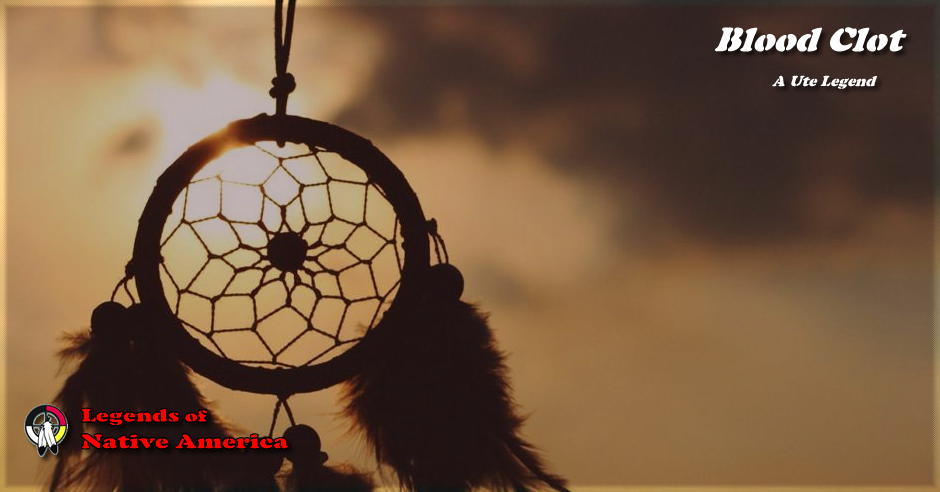 Long ago a very old man and his wife lived alone and hunted for game, but it was scarce and they were hungry.

One day the man discovered some buffalo tracks and followed them to the place where the animal had stopped. There he found only a big clot of blood, which he wrapped in his shirt and carried home.

The old man told his wife to boil the blood, and she put it into the kettle with water from the creek. But before it came to a boil over the fire, they heard cries inside the kettle. The man ran up to it and pulled out a baby, a little boy, who had somehow formed out of the blood clot.

The old couple washed the baby and wrapped him up. By the next morning he had grown much larger, and that day he continued to grow until he could crawl about by himself. The second day he was able to walk a little; by the third day he was walking with ease. The couple called him Blood Clot and came to treat him as their son.

The old man made little arrows so that the child could learn to shoot. Soon Blood Clot needed much larger arrows, and with them he began to hunt birds and other small game. He never brought the game home himself, but sent the old man for it.

One day Blood Clot returned from hunting and said, "I have killed something with a striped back."

The man went out and fetched an animal bigger than a mouse, which he cooked for the three of them. The next day the boy announced, "I have killed a white short-tailed animal." It was a cottontail, which the man also cooked.

The day after that, Blood Clot went farther and killed a badger. "I have killed an animal in a hole in the ground," he said, and the man brought the creature home and cooked it.

The following day when the boy returned, he said, "I have killed animal with black ears and a black tail." To the old man's joy, it was a female deer. The three of them ate and were happy.

Next Blood Clot said, "I have killed a big fellow with big antlers." It was an elk, so again the family feasted on meat. The old man gave the boy a full-sized bow and arrows, and Blood Clot went into the mountains and shot a mountain goat. "I have killed an animal with big horns in the mountains," he said when he came down. "Every day," the old man said proudly, "he kills a different kind of animal."

At last there came a day when Blood Clot said, "I want to visit the village where many people live. Before that, I will go on my last hunt for you, all day and all night. First I want you to tie up the tent, put rocks on the edge, and fasten the door lest the night wind carry it away. Though the wind will be strong, don't go outdoors and don't be afraid. I will call when you can come out."

The old couple obeyed, and he hunted all night while they were sleeping. About daybreak they heard a big noise, forerunner of a wind that threatened to tip over the tent. The man was frightened and wanted to go out, but the wife held him back, reminding him of what their son had said.

When daylight came, they heard their son's voice: "Come on out; I'll show you something." They unfastened the door and saw dead buffalo lying all around. "I have done this for you," Blood Clot said. "Dry the meat and hides; save the meat and it will last you for a long time."

The young man asked his mother to fix him a lunch, and she gave him pemmican. "Now my parents have plenty of food," he said. As he left, they cried and asked him to return.

Wearing buckskin leggings, carrying a quiver of mountain lion skin, Blood Clot began to travel. After a few days he reached the village.

At the outskirts he asked for the chief's house, and a man told him, "It is in the center." There he found the chief with his wife and daughter. They invited him to sit down, and the chief asked him where he came from and what his tribe was. "I don't know what tribe I belong to. I have come to visit you," Blood Clot replied. The chief stepped outdoors and shouted to the people to come and meet their visitor. The villagers were starving for lack of game, but all gathered at the chief's house and sat down.

The chief said, "Do any of you know the tribe of this young man?" People named the tribes - Deer, Elk, Otters, Beavers, and others. They asked him whether he belonged to any of these, but he thought not.

At last one old man said, "I think I know from the power in him, although I may be mistaken. I think he is one of the Buffalo."

Blood Clot thought about it, and finally agreed. The people of the village asked Blood Clot to stay and marry the chief's daughter. He agreed to this as well, and the wedding was held.

That evening he asked his father-in-law to bring one arrow from the tipi. When the chief returned, Blood Clot told him to have all the tipi's fastened and to warn the people that they should stay indoors, for there would be a great storm.

The chief told the villagers, and at daybreak when they heard a big noise, they cried out in fear but did not leave their tipi's.

Then Blood Clot called to the chief, who came out to find dead buffalo before every lodge. At his son-in-law's bidding he summoned the whole village for a feast, and all were happy.

Blood Clot stayed there until one day when a group of villagers went out to hunt buffalo. Long before this, he had told his wife, "You know the buffalo calf? I am part of that, it is part of me, so you must never say the word 'calf'."

When the party killed some buffalo and were butchering, another herd came running past. His wife pointed and called, "Kill that calf!" Immediately Blood Clot jumped on his horse and galloped away, changing as he did so into a buffalo.

His wife cried and attempted to catch him, but in vain. From that time on, Blood Clot ran with the buffalos.