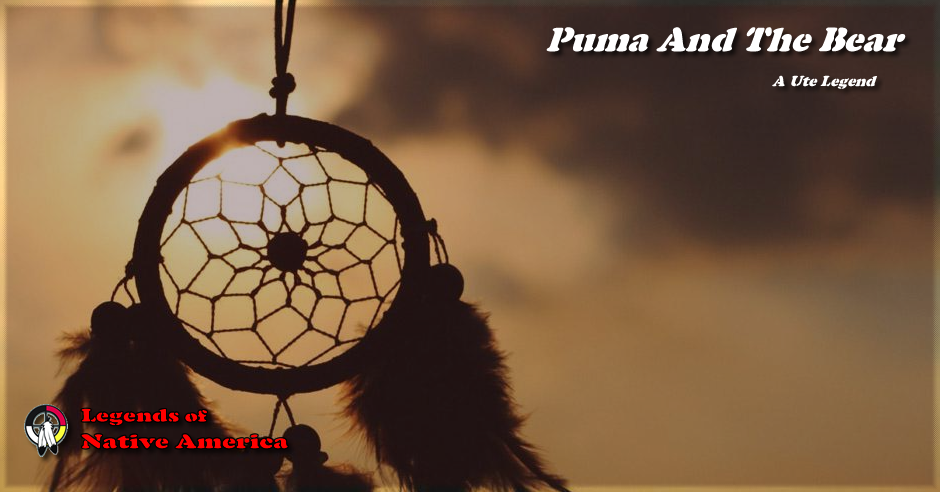 One day Puma took his son hunting with him. The Bear came to Puma's tent and saw his wife there, and immediately fell in love with her. "I wish to have her for my wife," he thought. Then he went in to where she was sitting.

In only a short time, he proposed that she run away with him. She consented and ran away with the Bear.

When Puma returned, he could not find his wife. "I wonder if she could have eloped with that Bear?" he mused. At first he and his son saw no tracks, but eventually they picked up the couple's trail. Angry by now, Puma followed the Bear tracks.

A high wind began to blow, obliterating most of the tracks. The next day Puma found them again and followed on. "Perhaps they are in that cedar wood," he thought. As he moved closer, he heard voices and recognized his wife's and the Bear's.

He sent his son to circle the wood, approaching from the other side of the wood to force the Bear out toward Puma. The woman said "Puma is very strong." "But I am stronger," said the Bear, seizing a cedar tree and pulling it from the ground. "He is stronger than that," said the woman.

The Bear had his moccasins off when Puma's son attacked. Quickly the Bear put on his moccasins, but in his haste he put them on the wrong feet. Then, not knowing who was coming behind him, he ran forward into Puma. The two grappled and Puma threw the Bear to the ground. The Bear rose up again and charged at Puma, who thrust the Bear down against a rock and broke the Bear's back.

Then Puma sent his wife away into the woods, letting her know that he did not want her for his wife again. Puma and his son left on another hunting trip to find a new wife and home for themselves.