The Woman and the Giants 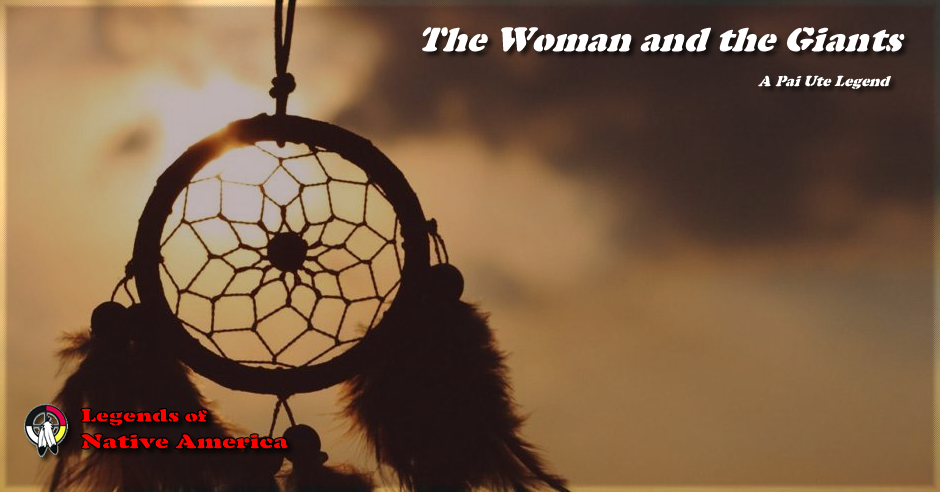 Once there lived a giant named Tse'nahaha who killed people by looking at them. He always carried a big basket of thorns on his back. When he caught anyone, he threw him over his back into the basket.

A group of Indians were playing the hand game in a certain house, and were having a good time. They had stationed a woman outside to watch for Tse- nahaha. After a while, she heard Tse'nahaha coming. He was talking to himself and singing. The woman tried to warn the people that the giant was coming, but they did not hear her. Tse'nahaha was getting closer. The woman became frightened, and jumped into a little pit and pulled a basket over herself.

She heard Tse'nahaha come up and stop. He stooped down and crawled into the doorway of the house and looked around. Twice he made a sucking noise with his lips. When he looked at anyone in the house, that person died at once. The others noticed the dead ones staring and said, "What are you people looking at? What is there worth looking at?"" Then they, too looked at Tse'nahaha and died. Soon they were all dead. Only a little baby was left inside, sleeping. Tse'nahaha went away.

The baby commenced to cry. It was almost daylight now. The baby crawled over to the people and pushed them over. Then the woman left the pit and went inside, but she did not look at the dead people. She called the baby, and said, "Let's go away." She set the house on fire, took the baby, and went away. With her digging-stick, she dug kani'd while the baby slept and ate.

As she was living this way, another giant, Pu'wihi came along. Pu'wihi picked up the baby, holding his head between his second and third fingers, and carried him over to the woman. He said to her, "Where are you from?" She answered, "I am from that house over there--the one with the smoke coming out. There are many men in it." The giant went toward the house. The woman was very frightened and tried to hide. She set her digging-stick in a clump of wild oats and vaulted as far as she could.

When the giant came back from the house he did not see her. He looked all around. He was furious and twisted his nose in anger. He found the wild oats and saw the mark of her stick. This showed in which direction she had jumped, and he went to a big flat rock. She had gone under this rock, and was crying.

The giant took the rock away and uncovered her, but it was dark by this time. He said, "I'll get her in the morning. Now I'll make a fire and grind up this baby." He found a large flat rock, ground up the baby, and ate him. He was having a fine time and lay there, singing. The woman could hear him. After a while he went to sleep. Then the woman got up and made another jump toward the east, to the house of her aunt.

When the woman came to her aunt's house, she was safe. The giant could not see the mark of her stick to find out which way she had jumped because this time she had jumped from a rock.

The Paiute Indians come from this woman.