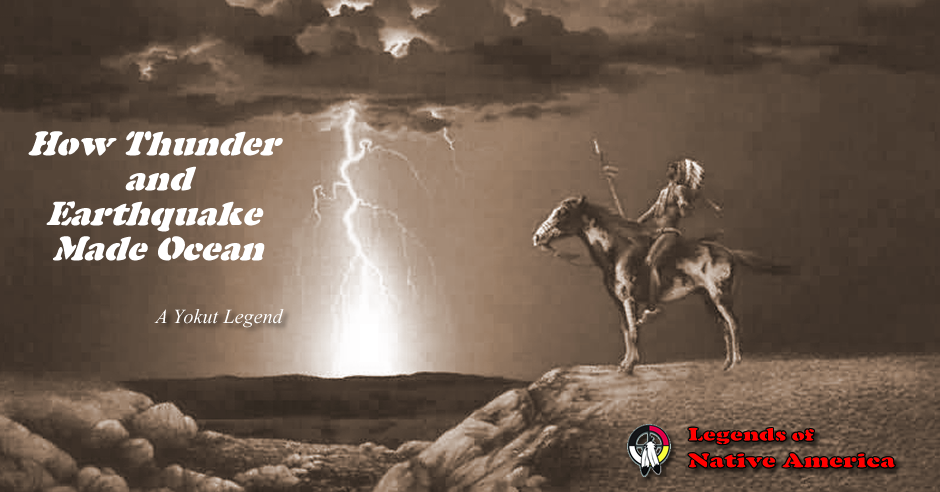 One day he said, “How shall the people live there is just prairie there?
Let us place the ocean there.” He said to Earthquake, “I want to have
water there, there so that the people may live. Otherwise they will have
nothing to live on.” He said to Earthquake, “What do you think?”
Earthquake thought. “That is true,” he said. “There should be water there.
Far off I see it. I see the water. It is at Opis.
There are salmon there and water.”
“Go,” said Thunder. “Go with Kingfisher, the one who sits there by the water. Go and get water at Opis.
Get water that is to come here.”

Then the two of them went. Kingfisher and Earthquake went to see the water. They went to get the water at Opis. They had two abalone shells that Thunder had given to them.
“Take these shells,” Thunder had said.
“Collect the water in them.”
First Kingfisher and Earthquake went to the north end of the world.
There Earthquake looked around. “This will be easy,” he said.
“It will be easy for me to sink the land.” Then Earthquake ran around.
He ran around and the ground sank.
It sank there at the north end of the world.

Then Kingfisher and Earthquake started for Opis.
They went to the place at the end of the water. They made the ground sink behind them as they went. At the Opis they saw all kinds of animals and fish that could be eaten there in the water at Opis.
Then they took water in the abalone shells.

Earthquake emptied his shell and it filled the ocean the rest of the way.

As they filled in the ocean, the creatures which would be food swarmed into the water. The seals came as if they were thrown in handfuls.

Now all the land animals, the deer and elk, the foxes and minks, the bear and others had gone inland. Now the water creatures were there.
Now Thunder and Kingfisher and Earthquake looked at the ocean.

“This is enough,” They said. “Now the people will have enough to live on. Everything that is needed is in water.” So it is that the prairie became ocean. It is so because Thunder wished it so.