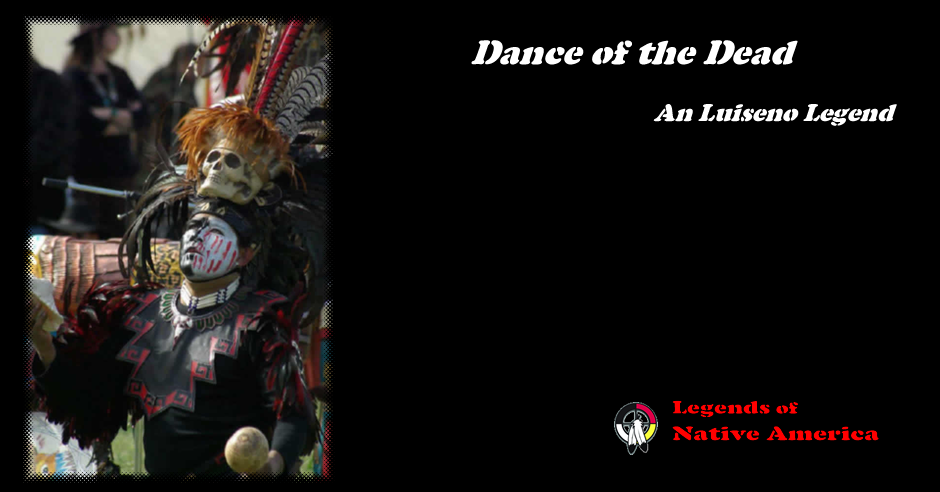 Once a year the People of Kamak left their village and went up Palomar Mountain to gather acorns. Everyone went, young and old, and even the ill were carried along on litters so that the village could stay together at this important time. The house were left empty, no one was afraid to thieves in those days.

While the village was deserted, a man from anther nearby village called Ahoya came to Kamak. He found everyone gone. He knew where they had gone, and why, so he knew he could not see his friends this trip. He decided to spend the night and go on his way the next morning. He did not go into anyone's house, but rather he took a large basket normally used to store grain and turned it over. He crawled under the basket, where the wind could not bother him. He fell asleep.

In the early evening, but long after dark, he was awakened by someone calling People out to dance. At first he thought the People of Kamak had come back from acorn gathering. Then, being a old man, he began to recognize the voices of People he had known many years ago, but who were now long dead He began to realize that the voices were spirits of the Dead! While the People of Kamak were away, the Dead had returned to dance.

The old man could not stand to wait any longer. After he had listened for hours, he wanted to look at the People he had known as a young man and the faces of the People he had only heard about in old stories. He threw the basket off and looked where the Dead had been dancing.

There was only a flock of birds, and they flew away, startled by the basket overturning. The turtle-shell rattle the Dead had played all night as they danced lay on the ground. It was now just a piece of soaproot.

The old man was not allowed to see the Dance of the Dead.