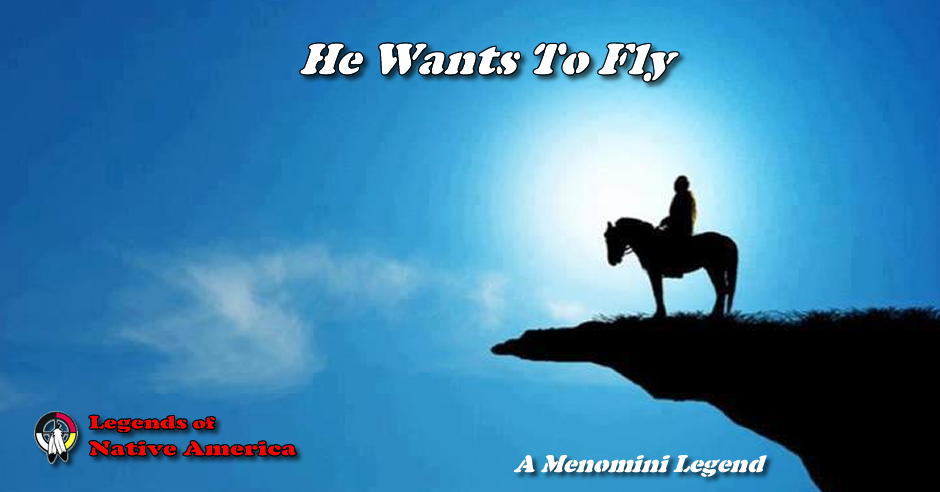 Once he saw Buzzard flying high in the air. He was dipping, and soaring, and flying in circles. His performance was worthy of admiration. After watching him for a while Manabush said to himself, "If I could only fly like him, how I should enjoy looking down on the things on earth." He moved his arms as if flying. He continued to do this for some time. Buzzard, noting his strange behavior, floated down. Manabush told him that he would like to be able to fly like him and from the sky look down on the earth. He would like to see what everyone was doing.

Buzzard laughed and told him that, not being a bird, he would never be able to fly. Just waving his arms would accomplish nothing. Buzzard told him to get on his back and to hold on. Soon they were high in the air. They flew about for quite long distances. Manabush did not see as much as he wished. It was so hard to keep his hold on Buzzard's back. He wanted to get back to earth. So Buzzard flew down to a high mountain peak. There he left him and flew away.

The sides of the mountain were very steep. It was a very dangerous placel After a while Manabush decided to try to plane down to earth. He spread his arms and jumped out as far as he could. His sownward flight was swift. He landed safely in a hollow tree. Here he was a prisoner for several days. He tried to get out but was not able to do so. At this time some women, who had come from their camp to get wood, found this dead tree. They decided to chop it down. Not wanting to frighten them away Manabush imitated the call of a porcupine crying, "ya he, ya he, ya he"! Thinking that they had found a procupine the women chopped down the tree. When Manabush crawled out they were frightened and ran away.