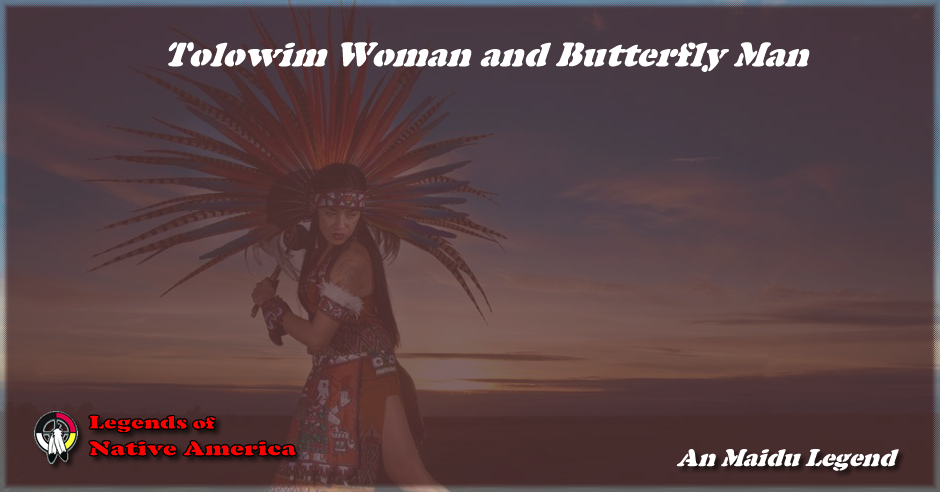 A Tolowim woman went out to gather food. She took her child with her, and while she worked, she stuck the point of the cradleboard in the ground and left the child alone. A large butterfly flew past, and she started after it and chased it for a long time. She wold almost catch it, and then just miss. She thought, "Perhaps I can't run fast enough because of this heavy thing," and she threw away her deerskin robe. But still she never could quite overtake the creature. Finally she threw away her apron too and hurried on, chasing the butterfly till night came. Then, her child forgotten, she lay down under a tree and went to sleep.

When she awoke in the morning, she found a man lying beside her. He said, "You have followed me this far; perhaps you would like to follow me always. If so, you must pass through a lot of my people." Without thinking of her child at all, the woman rose and followed the butterfly man. By and by they came to a large valley, whose southern side was full of butterflies. When the two reached the edge of the valley, the man said, "No one has ever before come through this valley alive. But you'll be safe if you don't lose sight of me. Follow closely."

They traveled for a long time. "Keep tight hold of me; don't let go," the butterfly man said again and again. When they come halfway through the valley, other butterflies swarmed about them in great numbers. They flew every way, all around the couple's heads and in their faces for they wanted to get the Tolowim woman for themselves. She watched them for a long time, holding tightly to her new husband. But at last, unable to resist, she let go of him and reached out to seize one of the others. She missed that one and she tried to grab a new one, now the other, but always failed, and so she wandered in the valley forever, dazed and lost.

She died there, and the butterfly man she had lost went on through the valley to his home. And now when people speak of the olden times they say that this woman lost her lover, and tried to get others but lost them, and went crazy and died.