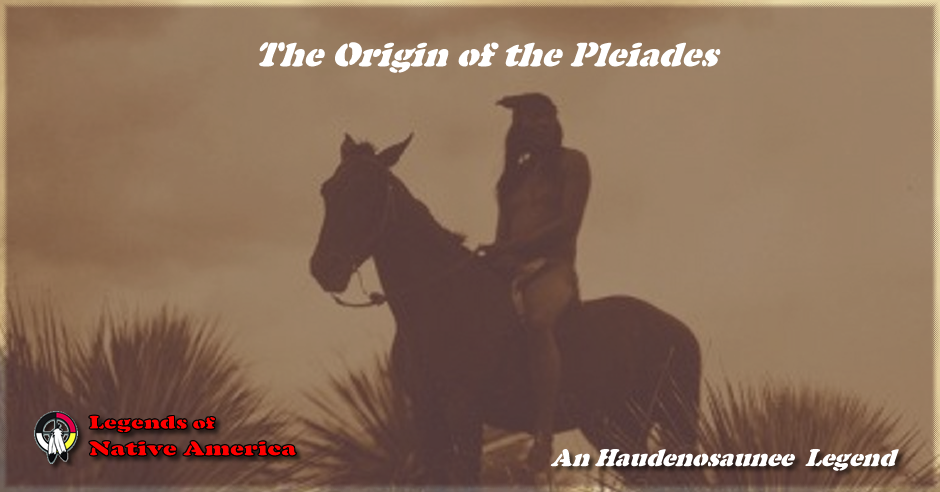 Once a party of Indians went throught the woods toward a hunting ground wich they had know for a long time. They traveled several days through very wild country, going slowly and camping on the way. At last they reached The Beautiful Lake of gray rocks and the great forest trees. Fish swarmed in the waters, and deer came down from the hills to drink. On the hills and in the valleys were huge beech and chestnut trees, where there were squirrels and bears.

The chief of the party was Tracks-in-the-Water, and he halted the group on the shore of the lake to give thanks to the Great Spirit for the safe arrival at the hunting grounds. "Here we will build our lodges for the winter and may the Great Spirit send us plent of game and health and peace."

Autumn passed on. The lodges were built and hunting went well. The children began to dance to amuse themselves. They were getting lonesome, having nothing to do, so they went to a quiet spot by the lake to dance. They had done this a long time when one day a very old man came to them. They had never seen anyone like him before. He was dressed in white feathers and his white hair shone like silver. He spoke to them, telling them they must stop dancing or evil would happen to them. The children did not pay any attention to him. Day after day they danced. Again and again he appeared, repeating his warning.

One of the children suggested a feast the next time thy met to dance. When they returned home, they all asked their parents for food. "You will waste and spoil good food," said one. "You can eat at home as you should," said another. So they got nothing. But they met again and danced anyway. They would have liked to have had something to eat after each dance. Their stomachs were empty.

One day, as they danced, they found themselves rising little by little into the air. Their heads were light from hunger. They didn't know how all this happened. One said. "Don't look back, for something strange is happening." A woman, who saw them, called them back, but with no effect, for they continued to rise slowly above the earth. She ran to the camp, and everyone rushed out with all kinds of food. But the children did not return, even thought their parents cried after them.

One, who did look back, became a falling star. The others reached the sky. They are the Pleiades. Every falling star brings the story to mind, but the seven stars shine on--a band of dancing children.