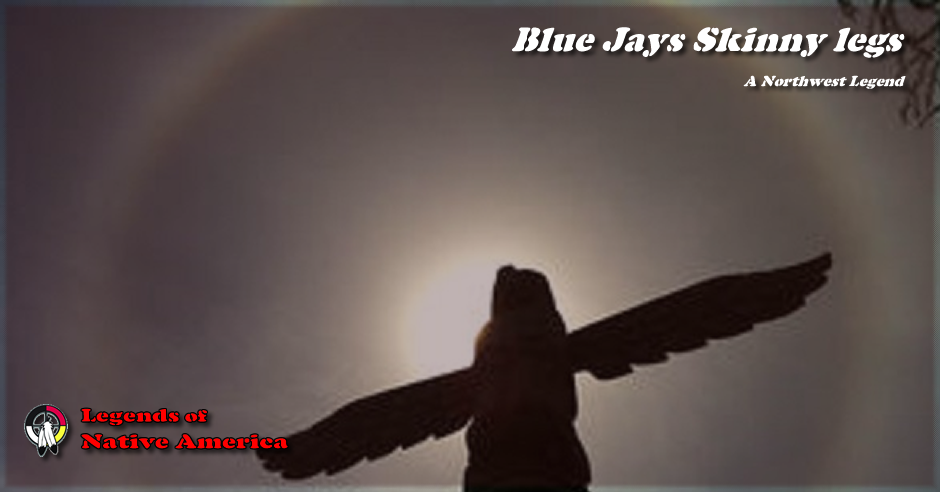 It happened a long time ago, before the arrival of the White brothers / sisters. There was a chief who had a very beautiful daughter. He wanted to make sure that she married a strong and healthy man. As the young men began to come around to flirt with his daughter, he became worried. He decided to reduce the odds by having a race. He informed all the young men that the one with the strongest legs could marry his daughter.

Coyote was crafty and a good runner with a lot of power, so he came first. He showed how long his legs were and how fast he could run. Then Deer came, a very handsome and strong buck. He showed how powerful his legs were at jumping, although they were somewhat knotted up. Then Grizzly Bear came along. Bear stood up and growled so everyone could see that he had very powerful and strong legs. So he claimed the girl.

But Blue Jay hollered that it was not fair, that others should still be considered. While the others were showing their legs, he hid behind an old log, where he had gathered a lot of tree moss and used clay to pack it around his legs. They looked larger and stronger than anyone's , even bigger than Grizzly Bears. But to sweeten the pot, Blue Jay also offered all kinds of beautiful feathers he had obtained from all of his different bird relations.

The old chief was fooled by this and let his daughter go with him Blue Jay had to carry his new wife across the stream in order to reach his tepee on the other side. As he began the hard journey, The water softened the moss and clay, so they fell from his legs.

When he climbed up on the other side of the stream bank, everyone began to laugh. Grizzly Bear came down and claimed his prize, and with his strong legs carried his new wife up the side of the mountain. Anytime he tries to come back and visit , the Blue Jay will start squawking all over the forest, and he makes a terrible noise. He does this because he is jealous and doesn't like to be laughed at.

The chief had a daughter who was old enough to marry. He informed the young men that one with the strongest legs could have her. Coyote showed how long and fast he could run and claimd the girl. Bear flexed his leg muscles to show how big and strong they were, and he claimed the girl. Jay sneaked off into the woods where he gathered some black moss that hangs from trees. He wrapped the moss around his legs to make them look large. The chief was fooled by his trick and proclaimed him the winner. Jay had to carry his new wife across a stream in order to reach his teepee, and the water softened the moss so it fell off his legs. When he climbed the bank on the opposite side of the stream, everyone saw his little skinny legs and they all laughed.