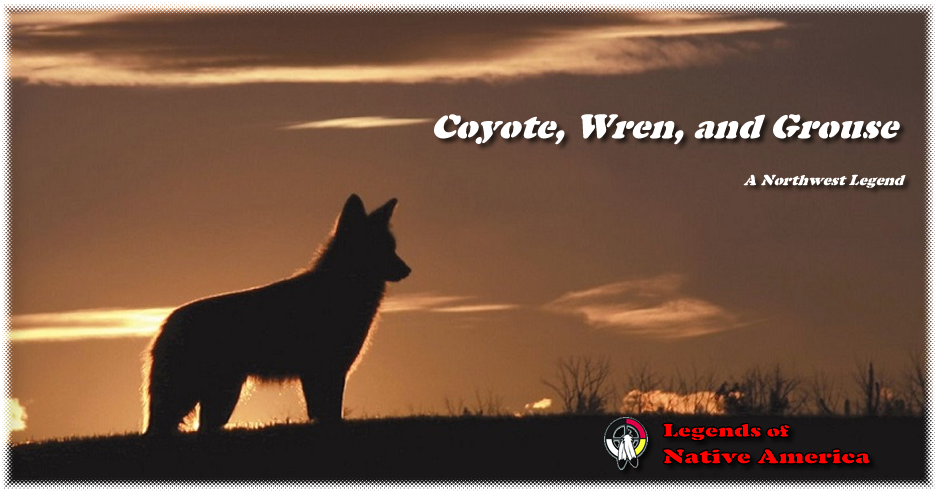 Once Coyote met Wren (tseska'n), and laughed at his small bow and arrows.

He said, "You can't shoot far with those."

Wren answered, "Yes, I can shoot far. If you go to that distant ridge, I will shoot you while you are there."

Coyote laughed, and said, "That ridge is so far away that we can hardly see it."

Soon afterwards Coyote was walking along this ridge, and Fox was following him. He had forgotten about his talk with Wren. Presently he heard something coming, and Wren's arrow struck him in the heart. He gave two jumps and fell down dead. Fox pulled out the arrow, and jumped over Coyote, who came to life, and said, "I must have slept a long time."

Fox said, "You were not sleeping, you were dead. Wren's arrow struck your heart. Why do you fool with Wren? You know he can shoot better than any one." Coyote took the arrow from Fox, and said, " I shall get even with him."

Some time after this, Coyote met Wren, and proposed to gamble with him. He said, "I have an arrow which looks like yours. Now you have a chance to win it back." They played a game of throwing arrows. Coyote beat Wren every time, and won all his arrows. Then he won his bow, and later all his beautiful clothes. Wren was left practically naked. Coyote went off singing, "Alpano'n e Kalispe'" (" I won from the Kalispel "). Wren followed him at some distance.

Coyote passed by the lodge of Willow-Grouse, who had ten young children. Their parents were off in the hills. Coyote asked the children, "Who is your father?"

He laughed, and said, "No, that cannot be his name." He asked the name of their mother; and they answered, Toxto'xtusêpu'scEn" (Flying-Past-between-the-Legs).

He laughed, saying, "No, that cannot be her name." He went into the lodge and dug a small hole near the fire. Then he said to the children, "Carry those red bearberries into the hole, and watch me cook them for you." They did so, and crowded around the edge to watch him. He pushed them into the hole, and threw earth and hot ashes on top of them. When they were cooked, he went on.

Their parents came home, and, finding their children dead, they cried. Wren came along, and asked them why they cried. They told him.

Wren said, "I have a grudge against Coyote, too. I want my things which he won from me. If you can get them back for me, I will restore your children to life."

Coyote was then passing over a high ridge, close to a steep cliff. Grouse made a detour, and hid ahead of him on the upper side. When Coyote was opposite them, one flew out suddenly at his head. He bent back over the cliff to avoid it. Then the other flew between his legs. He lost his balance and fell over the cliff. Grouse hastened, and plucked him as he was falling. They plucked away his bow and arrows and quiver and clothes, and gave them back to Wren, who then revived the Grouse children. Coyote was killed by the fall; but Fox found him, and brought him back to life by jumping over him.