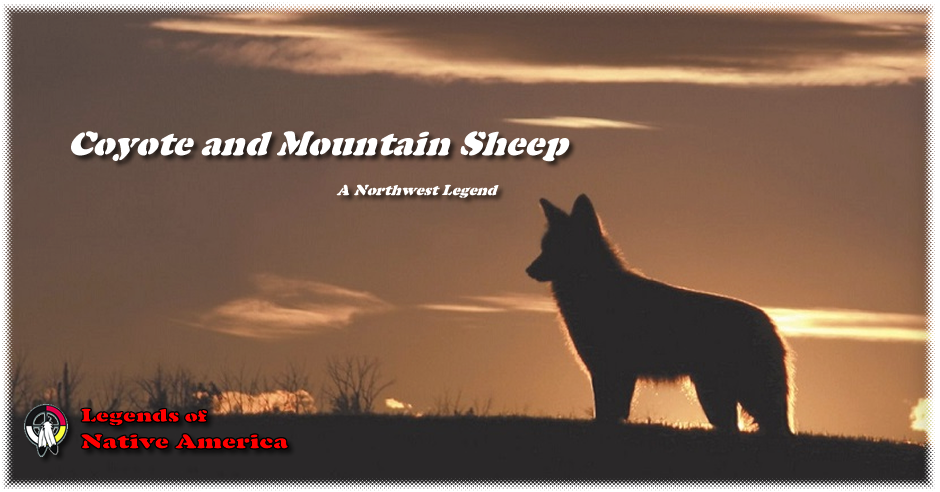 Coyote was traveling, and came to Amtkane', about five miles below Missoula, where a large rock is standing on the edge of a high cliff. It moves when it is pushed. Here lived the Mountain-Ram who killed people. He invited passers-by to push the rock over the cliff. When they failed, he invited them to look over the cliff at the sheep on the rocks below. Then, while they were looking, he would push them over, and thus kill them.

As Coyote was passing, Bighorn shouted to him. Coyote went up and asked him what he wanted.

He saw that Coyote was armed: so he said, "You have bow and arrows. I should like you to shoot those sheep among the rocks below."

Coyote went to look at them. Then Bighorn pushed him over, and he was killed on the rocks below.

Later Fox came along, and jumped over him. Then Coyote moved, rubbed his eyes, and said, " I must have slept a long time."

Fox answered, "You were dead. I told you not to come here."

Coyote said, "I will be revenged."

Coyote went the same way; and as he was passing, Bighorn shouted as before. Coyote asked him what he wanted.

Ram said to him, "You have bow and arrows. I want you to shoot these sheep."

Coyote went cautiously to the edge of the cliff, and pretended not to see the sheep. Bighorn pointed them out, but Coyote said he did not see them. Ram leaned out over the cliff to show them to Coyote, and the latter shoved him over and killed him. He said, "Had you kept on living and doing this way, you would have exterminated the people."