Legend of the Sea-Serpent 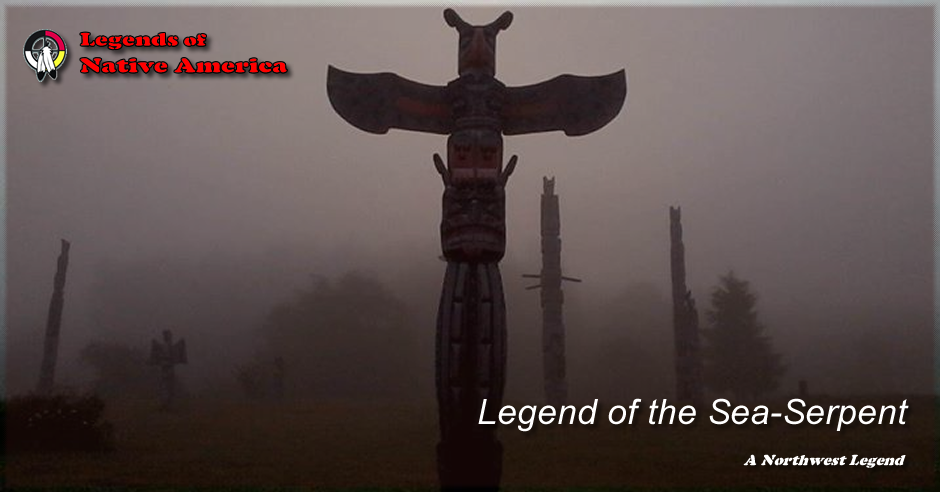 The sea-serpent across Deep Cove [sic Indian Arm] you could see the hole in the rock there that is where the sea-serpent used to be at the end of the inlet where that power house is now [Buntzen]. The Indians used to live at a village called TUHM-tuh-MEHK-tuhm, in the bay [Belcarra Bay] at Deep Cove. It is a bay facing this way, that‘s where one end of the serpent was [Deep Cove?] and the other end, on this little island over here [Jug Island?]. The sea-serpent used to be across there and nobody could come through here with their canoes..

The place where they had to skid their canoes they called, TUHM-tuh-MEHK-tuhm. That‘s the name of that bay [Belcarra Bay] and there used to be Indians that lived there . and the people all died of Smallpox. Everybody died . just a few left . a girl and a boy . an old man and his niece, a young girl..

This girl raised the baby . a boy, and he come to be a little big and I guess she got sick and tired of it, the baby, and one day she threw it overboard . she wanted to drown it. But the baby crawled and came to shore again and went into his house. This young lady thought, =I guess I had better do that every morning, throw him overboard‘. And this young lady did that every morning . threw him overboard, her brother..

That girl kept training him . throwing him overboard . because she had dreamed about how to get rid of that big serpent that they can‘t come by..

After a while, his boy got bigger and bigger and he asked his uncle to make him a canoe. His uncle made him a canoe and spear and he goes up to spear them seal when the seal are on the rocks, he spear them..

"When he is older, he goes for a swim every morning in the salt water. You have got to be clean, you know, or you won‘t get the =power‘. The time comes when the seals comeafter him when he‘s in the water and they grabbed this boy. They take him out (into the bay).

Everybody tried to catch them, but the seal held him up and they come around behind that little island and they go through . (thereby avoiding the serpent) and come right out. They came right out, (into 1st narrows), came right out; but they never go down, they hold that boy up. They come past here, then near to Siwash Rock. There is a big rock they called SKWAH-chice out there in the water which you can only see (it) at low tide. They came there with the boy and they went down under the water there.. AWS-quh, the seal, went down with that boy and they say, There is a hole from there right through to Tsawwassen, Point Roberts; they come up there. Nobody knows where they went. The seals they kidnapped that boy and nobody knows where they went..

That young lady, she kept her house clean. She burned medicine around the fire because she dreamed she should do that. After ten years, that boy came back. When he came back I guess the dogs knew there was somebody coming from the water and they run down and barked..

He, the boy, went down again, under water..

This young lady that lived there, she told those people that had the dogs to tie their dogs and put them away someplace..

Maybe that‘s my brother come back,. she said.

And he came back . the fourth day he came into the house . and his bed was all ready . his bed was fixed nice . the fire was on and medicine TLUHKS . everything just like the fire had been kept going..

At the time that boy goes away, there was a young lady that trained and went up to TAY-tuhm-suhn that lake where the power house is, when nobody knew. She was searching for her =power‘ so she would be ready to marry that boy when he came home again. In day . time they would hide her. She had a bed like a bunk, away up - and when people came into the house they could not see her, up there..

As soon as that boy came back, his uncle and that girl . they had everything ready for him; goat skins and bear skins . for rugs, you know. That young lady came down and came together with that man and got married right there..

The young man then tells his sister, who had trained him, =l‘m going to kill this animal, this serpent.‘ His sister had dreamed that this would take place just as she had dreamed of his training the ten years he was away...

When he went out to kill SAY-nohs-KIY, the serpent, the serpent told him, =If you are going to kill me, you get four sticks of pitch wood, real black pitch wood.‘ He sharpen them real sharp and jabbed them into the serpent, on his head . both ends, and that is the way they finished him . the sea-serpent. The =Power‘ came from the pitch . that‘s strong =medicine‘..

... The dream of acquiring the Power through discipline and hardship. As told by Squamish hereditary Chief Dominic Charlie at Capilano, December 15th, 1965 . To the native people of the Indian Arm area, the sea-serpent was a very real power and they feared to come within its grasp. The destruction of the sea-serpent came only after a life-time spent in special training with the one object in view. This legend gives the reader a clear insight into life as it was lived by the early natives.