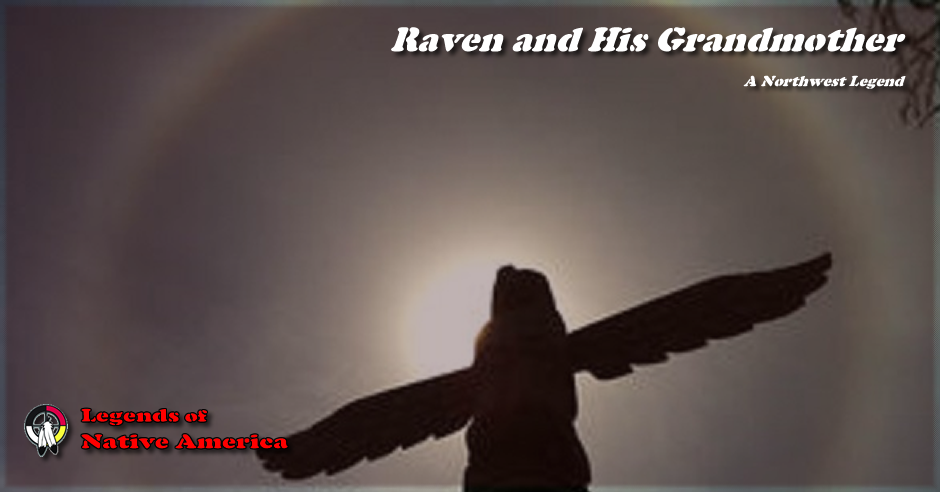 In her barrabara (a native home) at the end of a large village, lived an old grandmother with her grandson, a raven. The two lived apart from the other villagers because they were disliked. When the men returned from fishing for cod, the raven would come and beg for food, but they would never give him any of their catch. But when all had left the beach, the raven would come and pick up any leftover refuse, even sick fish. On these, raven and his grandmother lived.

One winter was extremely cold. Hunting was impossible; food became so scarce the villages neared starvation. Even their chief had but little left. So the chief called all his people together and urged them to use every effort to obtain food enough for all, or they would starve.

The chief then announced that he wished for his son to take a bride and she would be selected from the girls of the village. All the girls responded to the excitement of the occasion and dressed in their very best costumes and jewelry.

For a short time hunger was forgotten as the girls lined up for the contest and were judged by the critical eye of their chief, who selected the fairest of the fair for his son's bride. A feast was given by the chief following their marriage ceremony. But soon after hunger began again.

The raven perched on a pole outside his barrabara, observing and listening attentively to all that had happened. After the feast, he flew home and said to his grandmother, "I, too, want to marry." She made no reply, so he went about his work, gathering what food he could for his little home. Each day he flew to the beach and found dead fish or birds. He always gathered more than enough for two people. While he was in the village, he noted that the famine seemed worse. So he asked the chief, "What will you give me, if I bring you food?"

The chief looked at him in great surprise and said, "You shall have my oldest daughter for your wife." Nothing could have pleased raven more. He flew away in a joyful mood and said to his grandmother, "Let's clean out the barrabara. Make everything clean for my bride. I am going to give the chief some food, and he has promised to give me his oldest daughter."

"Ai, Ai, Y-a-h! You are going to marry? Our barrabara is too small and too dirty. Where will you put your wife?"

"Caw! Caw! Caw! Never mind. Do as I say," he screamed at his grandmother, and began pecking her to hurry.

Early next morning raven flew away, and later in the day returned with a bundle of yukelah (dried salmon) in his talons. "Come with me to the chief's house, grandmother," he called to her. Raven handed the fish to the chief and received the chief's oldest daughter for his bride.

Raven preceded his grandmother as she brought the bride to their little home. He cleared out the barrabara of old straw and bedding When the two women arrived, they found the little home empty, and the grandmother began to scold him and said, "What are you doing? Why are you throwing out everything."

"I am cleaning house, as you can see," raven curtly said. When night came, raven spread wide one wing, and asked his bride to lie on it, and then covered her with the other wing. She spent a miserable night, as raven's fish odour nearly smothered her. So she determined she would leave in the morning.

But by morning, she decided to stay and try to become accustomed to him. During the day she was cheerless and worried. When raven offered her food, she would not eat it. On the second night, raven invited her to lay her head on his chest and seek rest in his arms. Only after much persuasion did she comply with his wish. The second night was no better for her, so early the next morning she stole away from him and went back to her father's house, telling him everything.

Upon waking and finding his wife gone, raven inquired of his grandmother what she knew of his wife's whereabouts. She assured raven that she knew nothing. "Go then to the chief and bring her back to me," called raven. Grandmother feared him and left to do his bidding. When she came to the chief's house, she was pushed out of the door. This she promptly reported to her grandson.

The summer passed warm and pleasant, but a hard winter and another famine followed. As in the previous winter, the grandmother and the raven had plenty of food and wood, while others suffered greatly from lack of food. Raven's thoughts again turned to marriage. This time she was a young and beautiful girl who lived at the other end of the village. He told his grandmother about her and that he wanted to marry her. He asked, "Grandmother, will you go and bring the girl here, and I will marry her."

"Ai, Ai, Y-a-h! And you are going to marry her? Your first wife could not live with you because you smell strong. The girls do not wish to marry you.

To impress his commands and secure her obedience, he started pecking at her until she was glad to go. While his grandmother was gone, raven became restless and anxious. He hopped about the barrabara and nearby hillocks, straining his eyes for a sight of his expected bride.

Hurriedly he began cleaning out the barrabara, throwing out old straw, bedding, baskets, and all. The grandmother upon her return scolded raven, but he paid no attention to her.

The young bride, like her predecessor, was enfolded tightly in his wings, and likewise she had a wretched and sleepless night. But she was determined to endure his odour if possible. She thought at least with him she would have plenty of food to eat. The second night was as bad as the first, but she stayed on and secretly concluded she would do her best to stay until spring.

On the third day the raven, seeing that his wife was still with him, said, "Grandmother, tomorrow I will go and get a big, fat whale. While I am gone, make a belt and a pair of torbarsars (native shoes) for my wife."

"Caw! Caw! Caw! Be quiet and do what I tell you: make the belt and torbarsars while I go and get the whale," he angrily exclaimed, using his most effective method of silencing her.

Before dawn next morning the raven flew away to sea. In his absence the old woman was busily engaged making the things for the young bride, who watched and talked to her. About midday, they saw raven flying toward shore, carrying a whale.

The grandmother started a big fire, and the young woman tucked up her parka (native dress), belted it with her new belt, put on the new torbarsars, sharpened the stone knife, and went to the beach to meet her husband. As he drew near he called, "Grandmother, go into the village and tell all the people that I have brought home a big, fat whale."

She ran as hard as she could and told the joyful news. The half- dead people suddenly became alive. Some sharpened their knives, others dressed in their best clothes. But most of them just ran as they were and with such knives as they had with them to the beach to see the whale.

His sudden importance was not lost on the raven, who hopped up and down the whale's back, viewing the scene of carnage, as the people gorged themselves on the whale.

Every few moments raven would take a pebble out of his bag, then after some thought put it back. When the chief and his relatives came near, raven drove them away. They had to be content just watching the people enjoy their feasting, and carrying off blubber to their homes. Later, in the village, the people did share with the chief.

The raven's first wife, the chief's daughter, had a son by him, a little raven. She had it in her arms at the beach and walked in front of raven, where he could notice her. "Here is your child, look at it," she called. But he ignored her. She called to him several times and continued to show him the baby. At last he said, "Come closer--nearer still." But when she could not stand his odour any longer, she left him without a word.

Death occurred as a result of the feast. Many of the people ate so much fat on the spot that they died soon after. The rest of the people had eaten so much and filled their barrabaras so full, that during the night they all suffocated. Of the entire village, only three were left--the raven, his new wife, and the grandmother. There they lived on as their descendants do to this day.