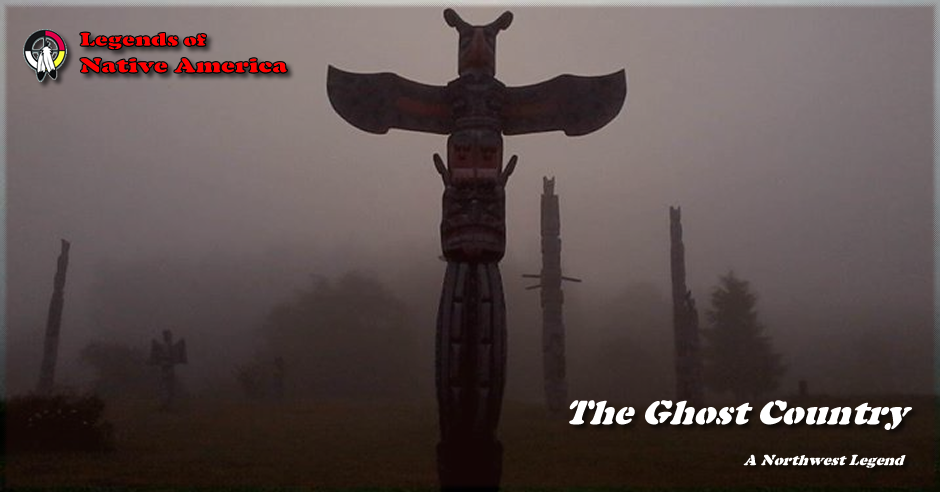 The ghosts live in four houses, each one deeper than the preceeding one. A Koskimo woman was crying on account of her dead father. They buried him and she was crying under the grave for four days. The people called her but she refused to leave. On the fourth day she heard somebody come who called her. "I call you downward, Crying Woman."

Then she jumped up and the ghost said, "Follow me." He went downward and she followed him. They came to a a house called Hemlock-Leaves-on-Back. They entered the house and an old woman was sitting near the fire. She said, "Ah, ah, ah, ah. Sit down near the fire." They took poles to take down dry salmon and prepared to roast it. They placed it on a small food mat and broke it up and gave it to Crying Woman.

Just when she was about to take it, a person came in and invited her to another house called Maggots-on-Bark-on-Ground. Then the woman who lived in the first house said, "Ah, ah, ah, ah. Go with ther. They are higher in rank than we are." She followed the person who had invited her and entered the next house. She saw an old woman sitting by the fire and seemed to be the same one whom she had seen first. She prepared food in the same way, giving her something to eat.

Just when she was about to eat, another woman came to her and invited her into her house, which was called Place-of-Mouth-Showing-on-Ground. The woman in the second house said, "Go with her. They are higher in rank than we are." When she entered, the same old woman seemed to be sitting by the fire. Again they prepared something for her to eat.

When she was just about to begin, she was called by another person into the fourth house, called PLace-of-Never-Return. Again the woman said, "They are higher in rank that we. Go." When she entered she saw her father sitting at the end of the house. And when he saw her he became angry and said, "Why do you come here? This is the place which nobody ever returns. Whoever enters the first three houses may return. But if you come here, you must stay. Do not eat what is offered to you and go back."

Then he called the ghosts to take her back. She was lying under the grave tree like one dead. The ghosts came back singing the following song:

She was like one dead when she came back. When her father spoke to her he said, "When we take you back we will sing so that the Koskimo may here our song." They brought her up alive on a board. The people heard the song, but they did not see anyone. Then they took the board into the winter-dance house. This songs belongs originally to the Koskimo and was carried from there to the Newettee and to the Nåkwado.