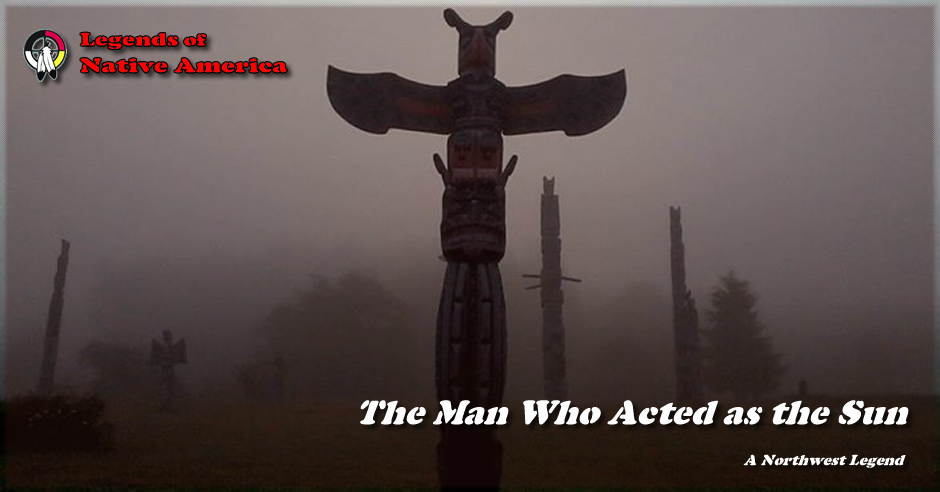 Once upon a time there lived a woman some distance up Bellacoola River. She refused the offer of marriage from the young men of the tribe, because she desired to marry the Sun. She left her village and went to seek the Sun. Finally she reached his house and married the Sun. After she had been there one day, she had a child. He grew very quickly, and on the second day of his life he was able to walk and to talk. After a short time he said to his mother, "I should like to see your mother and your father", and he began to cry, making his mother feel homesick. When the Sun saw that his wife felt downcast and that his son was longing to see his grandparents, he said, "You may return to the earth to see your parents. Descend along my eyelashes. His eyelashes were the rays of the Sun, which he extended down to his wife's home, where they lived with the woman's parents.

The boy was playing with the children of the village, who were teasing him, saying that he had no father. He began to cry and went to his mother, whom he asked for bow and arrows. He mother gave him what he requested. He went outside and began to shoot his arrows toward the sky. The first arrow struck the sky and stuck in it; the second arrow hit the notch of the first one, thus he continued until a chain was formed, extending from the sky down to the place where he was standing. Then he ascended the chain. He found the house of the Sun, which he entered. He told his father that the boys had been teasing him, and he asked him to let him carry the sun. But his father said, 'You cannot do it. I carry many torches. Early in the morning and late in the evening I burn small torches, but at noon I burn the large ones." The boy insisted on his request. Then his father gave him the torches, warning him at the same to observe carefully the instructions that he was giving in regard to their use.

Early the next morning, the young man started on the course of the sun, carrying the torches. Soon he grew impatient and lighted all the torches at once. Then it grew very hot. The trees began to burn, and many animals jumped into the water to save themselves, but the water began to boil. Then his mother covered the people with her blanket and thus saved them. The animals hid under stones. The ermine crept into a hole, which, however, was lot quite large enough, so that the tip of its tail protruded from the entrance. It was scorched, and since that time the tip of the ermine's tail has been black. The mountain goat hid in a cave, hence it's skin is perfectly white. All the animals that did not hide were scorched and therefore have black skins, but the skin on the lower side remained lighter. When the Sun saw what was happening, he said to his son, "Why do you do so? Do you think it is good that there are no people on the earth?"

The Sun took him and cast him down from the heavens, saying, "You shall be the mink, and future generations of man shall hunt you."