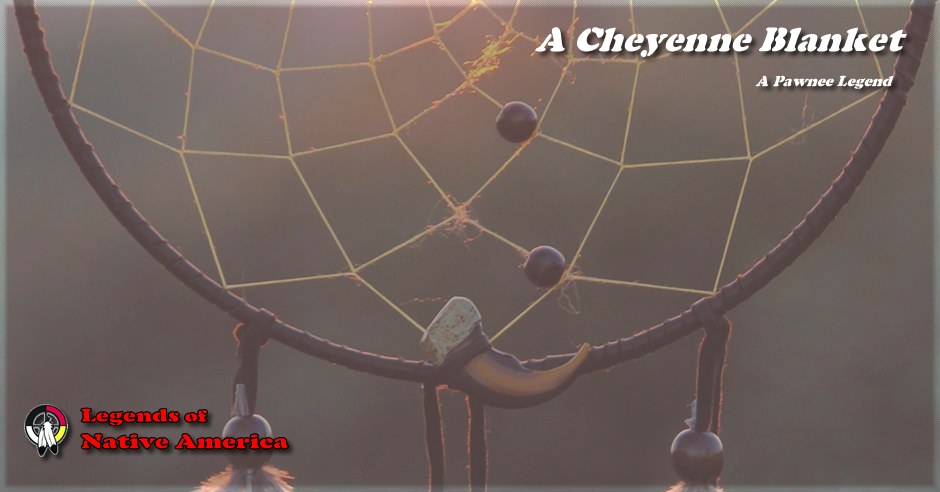 The Cheyennes, like other Indians, do nt speak to each other when they are away from the camp. If a an leaes the village and sits or stands by himself on the top of a hill, it is a sign that he wants to be alone, perhaps to meditate, perhaps to pray. No one speaks tim him or goes near him.

There was once a Pawnee boy who went off on the warpath to the Cheyenne camp. Somehow he obtained a Cheyenne blanket. He came close to the camp, hid himself and waited. About the middle of the afternoon he left his hiding place and walked to the top of the hill overlooking the village. He had his Cheyenee blanket wrapped about him and over his head, with only a little hole for eyes. He stood quiety watching the camp for an hour or two.

Men began comin in from fuffalo hunting, some of them leading packhorses loaded with meat. One hunter was riding a horse packed with meat while he led another packhorse and a black spotted horse that was his running horse. Running horses are ridden only on the chase or on war parties, and after being used they are taken down to the river to be carefully washed and groomed. When the Pawnee boy saw the spotted horse, he knoew that his was the one he wanted. The hunter led the animal to his lodge, dismounted and handed the ropes to his women, and went inside.

Then the Pawnee made up his mind what he would do. He started down the hill into the village and went straight to the lodge wher the women were unloading the meat. Walking up to them, he reached out and took the ropes of the spotted horse and one of the packhorses.

The women fell back, doubtless thinking that he was one of the owner's relatives come to take the running horse down to the river. The Pawnee could not speak Cheyenne, but as he turned away he mumbled something, "M-m-m-m-m," in a low voice, and walked toward the river. As soon as he had gone down over the bank and out of sight, he jumped on the spotted horse, rode into the brush, and soon was away with the two animals, stole out of the Cheyenne camp in broad daylight.