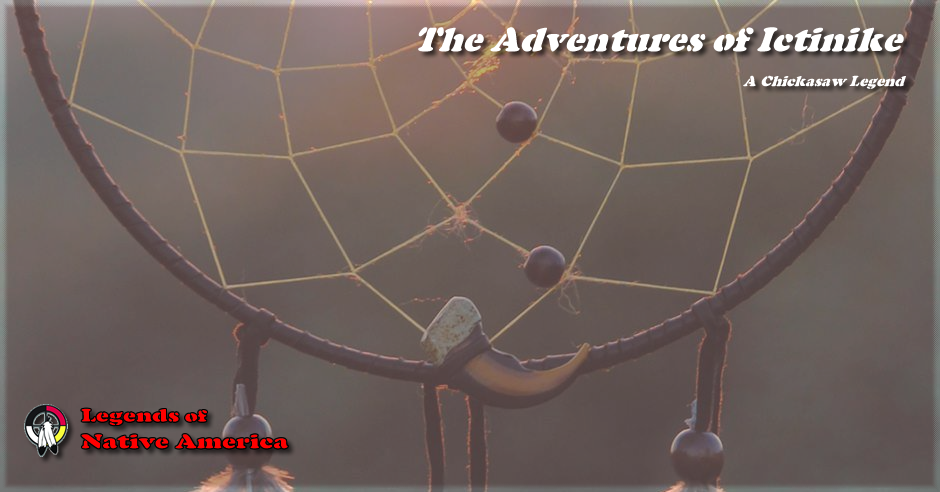 Many tales are told by the Iowa Indians regarding Ictinike, the son of the sun-god, who had offended his father, and was consequentially expelled from the celestial regions. He possesses a very bad reputation among the Indians for deceit and trickery. They say that he taught them all the evil things they know, and seem to regard him as the Father of Lies. The Omahas state that he gave them their war-customs, and for one reason or another they appear to look upon him as a species of war-god. A series of myths recound his adventures with several inhabitants of the wild. The first of these is as follows.

One day Ictinike encountered the Rabbit, and hailed him in a friendly manner, calling him 'grandchild,' and requesting him to do him a service. The Rabbit expressed his willingness to assist the god to the best of his ability, and inquired what he wished him to do.

"Oh, grandchild," said the crafty one, pointing upward to where a bird circled in the blue vault above them, "take your bow and arrow and bring down yonder bird."

The Rabbit fitted an arrow to his bow, and the shaft transfixed the bird, which fell like a stone and lodged in the branches of a great tree.

"Now, grandchild," said Ictinike, "go into the tree and fetch me the game."

This, however, the Rabbit at first refused to do, but at length he took off his clothes and climbed into the tree, where he stuck fast among the tortuous branches. Ictinike, seeing that he could not make his way down, donned the unfortunate Rabbit's garments, and, highly amused a the animal's predicament, betook himself to the nearest village.

There he encountered a chief who had two beautiful daughers, the elder of whom he married. The younger daughter, regarding this as an affront to her personal attractions, wandered off into the forest in a fit of the sulks. As she paced angrily up and down she heard some one calling to her from above, and, looking upward, she beheld the unfortunate Rabbit, whose fur was adhering to the natural gum which exuded from the bark of the tree. The girl cut down the tree and lit a fire near it, which melted the gum and freed the Rabbit. The Rabbit and the chief's daughter compared notes, and discovered that the being who had tricked the one and affronted the other was the same.

Together they proceeded to the chief's lodge, where the girl was laughed at because of the strange companion she had brought back with her.. Suddenly an eagle appeared in the air above them. Ictinike shot at and missed it, but the Rabbit loosed an arrow with great force and brought it to earth. Each morning a feather of the bird became another eagle, and each morning Ictinike shot and missed this newly created bird, which the Rabbit invariably succeeded in killing. This went on until Ictinike had quite worn out the Rabbit's clothing and was wearing a very old piece of tent skin; but the Rabbit returned to him the garments he had been forced to don when Ictinike had stolen his.

Then the Rabbit commanded the Indians to beat the drums, and each time they were beaten Ictinike jumped so high that every bone is his body was shaken. At length, after a more than usually loud series of beats, he leapt to such a height that when he came down it was found that the fall had broken his neck. The Rabbit was avenged.