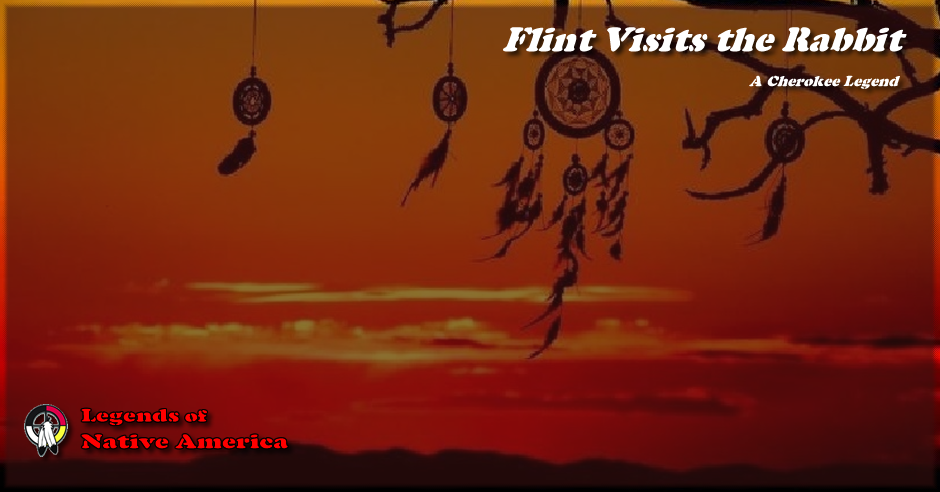 In the old days Täwi'skälä (Flint) lived up in the mountains, and all the animals hated him because he had helped to kill so many of them.

They used to get together to talk over means to put him out of the way, but everybody was afraid to venture near his house until the Rabbit, who was the boldest leader among them, offered to go after Flint and try to kill him.

They told him where to find him, and the Rabbit set out and at last came to Flint's house. Flint was standing at his door when the Rabbit came up and said, sneeringly, "Siyu'! Hello! Are you the fellow they call Flint?"

All this time the Rabbit was looking about the place trying to study out some plan to take Flint off his guard.

He had expected Flint to invite him into the house, so he waited a little while, but when Flint made no move, he said, "Well, my name is Rabbit; I've heard a good deal about you, so I came to invite you to come and see me."

Flint wanted to know where the Rabbit's house was, and he told him it was down in the broom-grass field near the river.

So Flint promised to make him a visit in a few days. "Why not come now and have supper with me?" said the Rabbit, and after a little coaxing Flint agreed and the two started down the mountain together.

When they came near the Rabbit's hole the Rabbit said, "There is my house, but in summer I generally stay outside here where it is cooler."

So he made a fire, and they had their supper on the grass. When it was over, Flint stretched out to rest and the Rabbit got some heavy sticks and his knife and cut out a mallet and wedge.

Flint looked up and asked what that was for. "Oh," said the Rabbit, "I like to be doing something, and they may come handy."

So Flint lay down again, and pretty soon he was sound asleep. The Rabbit spoke to him once or twice to make sure, but there was no answer.

Then he came over to Flint and with one good blow of the mallet he drove the sharp stake into his body and ran with all his might for his own hole; but before he reached it there was a loud explosion, and pieces of flint flew all about.

That is why we find flint in so many places now. One piece struck the Rabbit from behind and cut him just as he dived into his hole.

He sat listening until everything seemed quiet again. Then he put his head out to look around, but just at that moment another piece fell and struck him on the lip and split it, as we still see it.