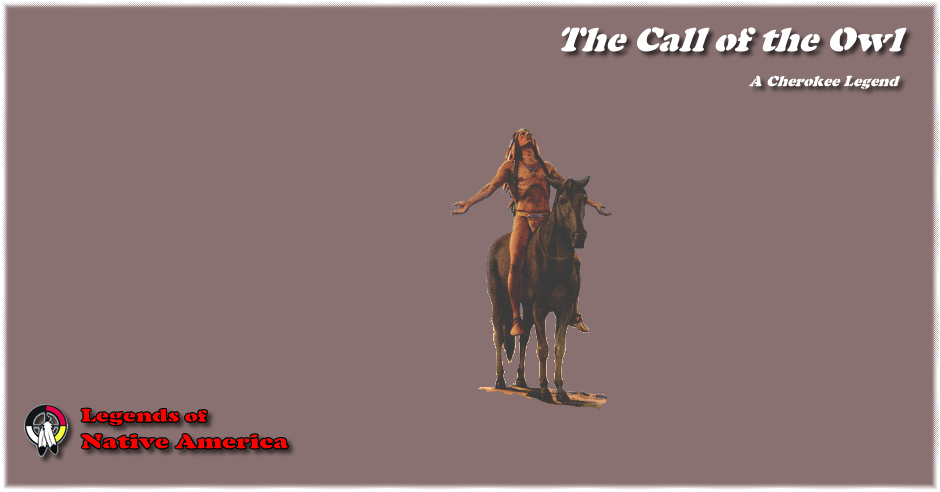 Long ago in the Red Indian tribe of the Cherokees there was a widow who had a very beautiful daughter. When the girl was old enough to marry, her mother took her aside.

"It's time, my child, to find yourself a husband," she said. "Your father was a famous hunter. Only another man like him is good enough for you."

Her daughter agreed, but she was a difficult, temperamental girl, and none of the young men of the tribe pleased her. One was too small, another too ugly, a third too poor and a fourth too simple. But one day a very handsome young man appeared at the widow's wigwam. She had never seen him before."

"I am U-gu-ku," he said. "I would like to marry your daughter. I've always wanted a wife as beautiful as her."

"My daughter," replied the woman, "must marry a good hunter, so she never goes hungry. My husband was a famous hunter, and we always had plenty of meat."

He was a pleasant young man, and so the widow called her daughter.

The girl liked the look of the young man, and so the marriage took place.

Next day the widow went to her new son-in-law.

"There's no more meat in the house," she said.

"Don't, worry, mother of my wife," replied U-gu-ku. "I'll go hunting." And off he went. But when he came back, all he had were three paltry little fish.

"I'm sorry," said U-gu-ku. "I had no luck hunting today, so I decided to go fishing. I've brought you three fish. No doubt I'll have better luck tomorrow."

Their supper that evening was not very lavish. But worse was to come, for the next day all that U-gu-ku brought back from the hunt were three lizards.

On the third day U-gu-ku returned very tired from the hunt, and handed the widow three scrawny little bits of meat that the other hunters had left behind. His wife and mother-in-law could not understand it. They began to wonder if U-gu-ku could be trusted.

"He told me he was a good hunter," said the widow, "but he has hardly killed a thing. Don't you think you should follow him secretly and see what he's doing?"

The girl agreed, and on the fourth day of her marriage she followed her husband into the forest, hiding behind the trees. WHen they came to the river, to her surprise and horror, U-gu-ku turned into an owl.

"U-gu-ku - oooooooo - ooooooo," he cried, flying up into the air and out over the river. Then suddenly, he swooped down to the water and seized a little crayfish.

The young woman was horrified to think she had an owl as a husband. She ran back home as fast as she could, weeping as if her heart would break.

That evening, when U-gu-ku returned, the crayfish was all he had. "Is that all you caught?" asked the wife.

"An owl stole the rest from me," he replied.

"But you're the owl!" cried the young woman furiously. "You've lied to me, you've tricked me, and what's more you're a dreadfully bad hunter!"

"Get out of my sight!" shouted his wife. "I never want to see you again."

So the owl flew away into the forest, cryihng and hooting dolefully. He was terribly unhappy, for he loved his wife with all his heart.

The Call of the Owl
[Cherokee]