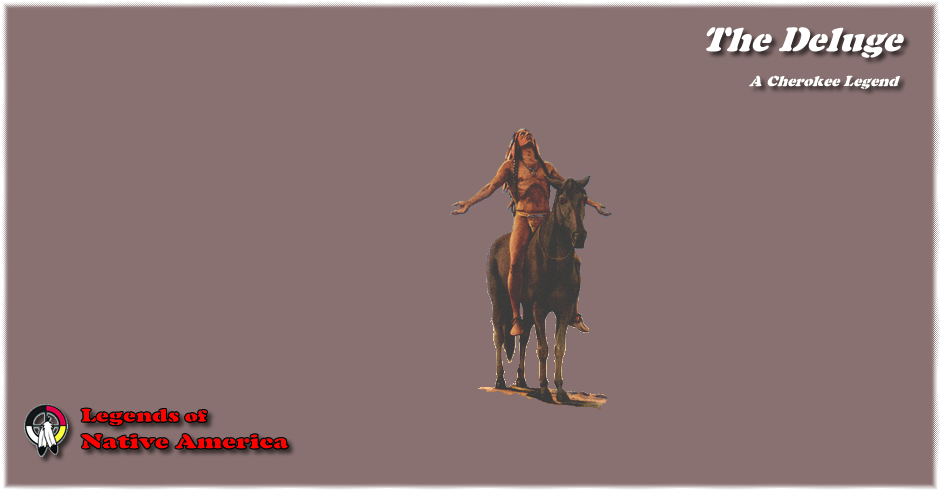 A long time ago a man had a dog, which began to go down to the river every day and look at the water and howl.

At last the man was angry and scolded the dog, which then spoke to him and said: "Very soon there is going to be a great freshet."

Then he said, "The water will come so high that everybody will be drowned; but if you will make a raft to get upon when the rain comes you can be saved, but you must first throw me into the water."

The man did not believe it, and the dog said, "If you want a sign that I speak the truth, look at the back of my neck." He looked and saw that the dog's neck had the skin worn off so the bones stuck out.

Then he believed the dog, and began to build a raft. Soon the rain came and he took his family, with plenty of provisions and they all got upon it. It rained for a long time, and the water rose until the mountains were covered and all the people in the world were drowned.

Then the rain stopped and the waters went down again, until at last it was safe to come off the raft. Now there was no one alive but the man and his family, but one day they heard a sound of dancing and shouting on the other side of the ridge.

The man climbed to the top and looked over; everything was still, but all along the valley he saw great piles of bones of the people who had been drowned, and then he knew that the ghosts had been dancing.

A Cherokee Legend
Myths of the Cherokee,