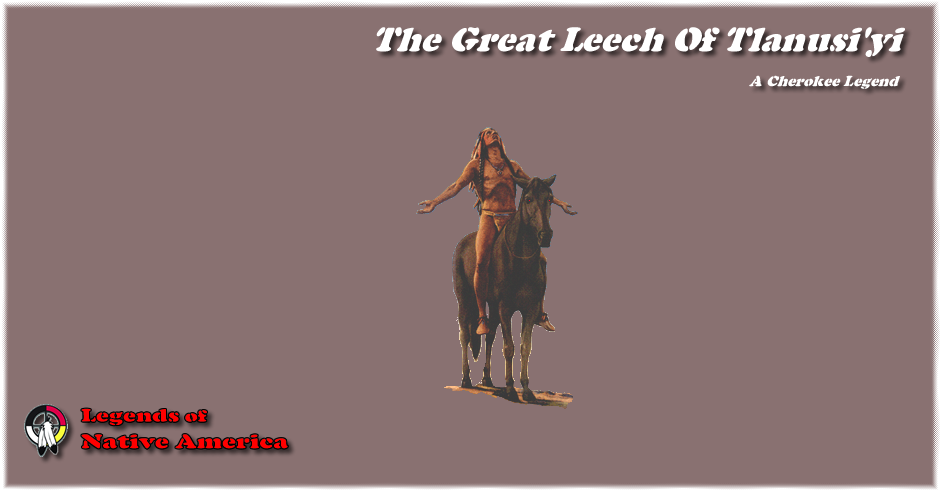 The spot where Valley river joins Hiwassee, at Murphy, in North Carolina, is known among the Cherokees as Tlanusi'yï, "The Leech place," and this is the story they tell of it: Just above the junction is a deep hole in Valley river, and above it is a ledge of rock running across the stream, over which people used to go as on a bridge. On the south side the trail ascended a high bank, from which they could look down into the water. One day some men going along the trail saw a great red object, full as large as a house, lying on the rock ledge in the middle of the stream below them.

As they stood wondering what it could be they saw it unroll--and then they knew it was alive--and stretch itself out along the rock until it looked like a great leech with red and white stripes along its body. It rolled up into a ball and again stretched out at full length, and at last crawled down the rock and was out of sight in the deep water.

The water began to boil and foam, and a great column of white spray was thrown high in the air and came down like a waterspout upon the very spot where the men had been standing,. and would have swept them all into the water but that they saw it in time and ran from the place.

More than one person was carried down in this way, and their friends would find the body afterwards lying upon the bank with the ears and nose eaten off, until at last the people were afraid to go across the ledge any more, on account of the great leech, or even to go along that part of the trail.

But there was one young fellow who laughed at the whole story, and said that he was not afraid of anything in Valley river, as he would show them.

So one day he painted his face and put on his finest buckskin and started off toward the river, while all the people followed at a distance to see what might happen.

Down the trail he went and out upon the ledge of rock, singing in high spirits: Tlanu'si gäe'ga digi'gäge (I'll tie red leech skins) Dakwa'nitlaste'stï (On my legs for garters) But before he was half way across the water began to boil into white foam and a great wave rose and swept over the rock and carried him down, and he was never seen again. Just before the Removal, sixty years ago, two women went out upon the ledge to fish.

Their friends warned them of the danger, but one woman who had her baby on her back said, "There are fish there and I'm going to have some; I'm tired of this fat meat." She laid the child down on the rock and was preparing the line when the water suddenly rose and swept over the ledge, and would have carried off the child but that the mother ran in time to save it.

The great leech is still there in the deep hole, because when people look down they see something alive moving about on the bottom, and although they can not distinguish its shape on account of the ripples on the water, yet they know it is the leech.

Some say there is an underground waterway across to Nottely river, not far above the mouth, where the river bends over toward Murphy, and sometimes the leech goes over there and makes the water boil as it used to at the rock ledge. They call this spot on Nottely "The Leech place" also.

they came near the settlement the man told the hunters that he must be shut up where no one could see him, without anything to eat or drink for seven days and nights, until the bear nature had left him and he became like a man again. So they shut him up alone in a house and tried to keep very still about it, but the news got out and his wife heard of it.

She came for her husband, but the people would not let her near him; but she came every day and begged so hard that at last after four or five days they let her have him. She took him home with her, but in a short time he died, because he still had a bear's nature and could not live like a man. If they had kept him shut up and fasting until the end of the seven days he would have become a man again and would have lived.