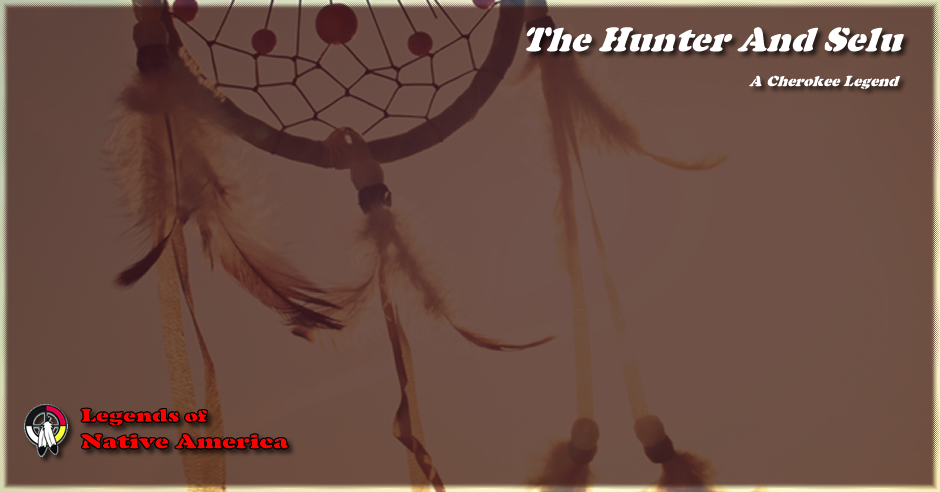 A hunter had been tramping over the mountains all day long without finding any game and when the sun went down, he built a fire in a hollow stump, swallowed a few mouthfuls of corn gruel and lay down to sleep, tired out and discouraged.

About the middle of the night he dreamed and seemed to hear the sound of beautiful singing, which continued until near daybreak and then appeared to die away into the upper air.

All next day he hunted with the same poor success, and at night made his lonely camp again, in the woods. He slept and the strange dream came to him again, but so vividly that it seemed to him like an actual happening. Rousing himself before daylight, he still heard the song, and feeling sure now that it was real, he went in the direction of the sound and found that it came from a single green stalk of corn (selu).

The plant spoke to him, and told him to cut off some of its roots and take them to his home in the settlement, and the next morning to chew them and "go to water" before anyone else was awake, and then to go out again into the woods, and he would kill many deer and from that time on would always be successful in the hunt.

The corn plant continued to talk, teaching him hunting secrets and telling him always to be generous with the game he took, until it was noon and the sun was high, when it suddenly took the form of a woman and rose gracefully into the air and was gone from sight, leaving the hunter alone in the woods.

He returned home and told his story, and all the people knew that he had seen Selu, the wife of Kana'tï. He did as the spirit had directed, and from that time was noted as the most successful of all the hunters in the settlement.