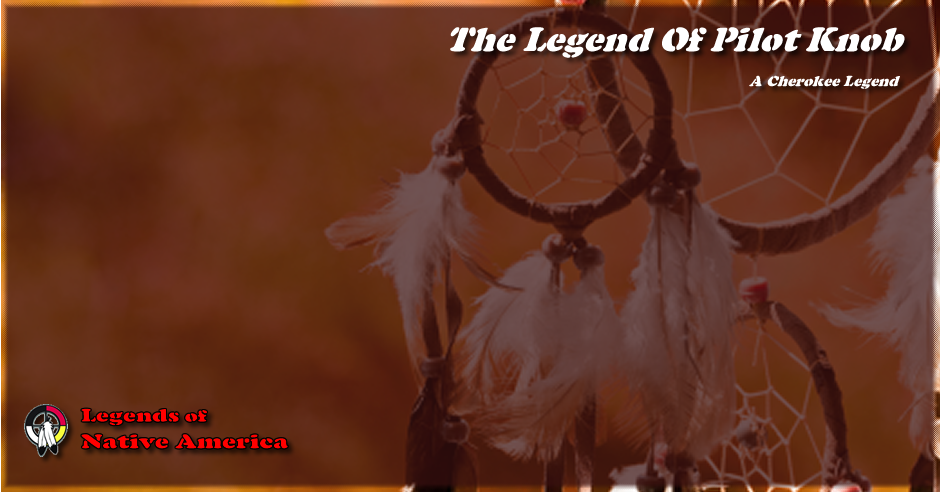 In the old town of Känuga, on Pigeon river, there was a lazy fellow named Tsuwe'nähï, who lived from house to house among his relatives and never brought home any game, although he used to spend nearly all his time in the woods.

At last his friends got very tired of keeping him, so he told them to get some parched corn ready for him and he would go and bring back a deer or else would never trouble them again. They filled his pouch with parched corn, enough for along trip, and he started off for the mountains. Day after day passed until they thought they had really seen the last of him, but before the month was half gone he was back again at Känuga, with no deer, but with a wonderful story to tell.

He said that he had hardly turned away from the trail to go up the ridge when he met a stranger, who asked him where he was going. Tsuwe'nähï answered that his friends in the settlement had driven him out because he was no good hunter, and that if he did not find a deer this time he would never go back again. "Why not come with me?" said the stranger, "my town is not far from here, and you have relatives there."

Tsuwe'nähï was very glad of the chance, because he was ashamed to go back to his own town; so he went with the stranger, who took him to Tsuwa`tel'da (Pilot knob). They came to a cave, and the other said, "Let us go in here;" but the cave ran clear to the heart of the mountain, and when they were inside the hunter found there an open country like a wide bottom land, with a great settlement and hundreds of people. They were all glad to see him. and brought him to their chief, who took him into his own house and showed him a seat near the fire. Tsuwe'nähï sat down, but he felt it move under him, and when he looked again he saw that it was a turtle, with its head sticking out from the shell.

He jumped up, but the chief said, "It won't hurt you; it only wants to see who you are." So he sat down very carefully, and the turtle drew in its head again. They brought food of the same kind that he had been accustomed to at home, and when he had eaten the chief took him through the settlement until he had seen all the houses and talked with most of the people.

When he had seen everything and had rested some days, he was anxious to get back to his home, so the chief himself brought him to the mouth of the cave and showed him the trail that led down to the river.

Then he said, "You are going back to the settlement, but you will never be satisfied there any more. Whenever you want to come to us, you know the way." The chief left him, Tsuwe'nähï went down the mountain and along the river until he came to Känuga.

He told his story, but no one believed it and the people only laughed at him. After that he would go away very often and be gone for several days at a time, and when he came back to the settlement he would say he had been with the mountain people. At last one man said he believed the story and would go with him to see.

They went off together to the woods, where they made a camp, and then Tsuwe'nähï went on ahead, saying he would be back soon, The other waited for him, doing a little hunting near the camp, and two nights afterwards Tsuwe'nähï was back again. He seemed to be alone, but was talking as he came, and the other hunter heard girls' voices, although he could see no one.

When he came up to the fire he said, "I have two friends with me, and they say there is to be a dance in their town in two nights, and if you want to go they will come for you." The hunter agreed at once, and Tsuwe'nähï called out, as if to some one close by, "He says he will go." Then he said, "Our sisters have come for some venison." The hunter had killed a deer and had the meat drying over the fire, so he said, "What kind do they want?"

The voices answered, "Our mother told us to ask for some of the ribs," but still he could see nothing. He took down some rib pieces and -gave them to Tsuwe'nähï, who took them and said, "In two days we shall come again for you." Then he started off, and the other heard the voices going through the woods until all was still again.

In two days Tsuwe'nähï came, and this time he had two girls with him. As they stood near the fire the hunter noticed that their feet were short and round, almost like dogs' paws, but as soon as they saw him looking they sat down so that he could not see their feet. After supper the whole party left the camp and went up along the creek to Tsuwa`tel'da.

They went in through the cave door until they got to the farther end and could see houses beyond, when all at once the hunter's legs felt as if they were dead and he staggered and fell to the ground. The others lifted him up, but still he could not stand, until the medicine-man brought some "old tobacco" and rubbed it on his legs and made him smell it until he sneezed. Then he was able to stand again and went in with the others. He could not stand at first, because he had not prepared himself by fasting before he started.

The dance had not yet begun and Tsuwe'nähï took the hunter into the townhouse and showed him a seat near the fire, but it had long thorns of honey locust sticking out from it and he was afraid to sit down. Tsuwe'nähï told him not to be afraid, so he sat down and found that the thorns were as soft as down feathers.

Now the drummer came. in and the dancers, and the dance began. One man followed at the end of the line, crying Kû! Kû! all the time, but not dancing. The hunter wondered, and they told him, "This man was lost in the mountains and had been calling all through the woods for his friends until his voice failed and he was only able to pant Kû! Kû! and then we found him and took him in."

When it was over Tsuwe'nähï and the hunter went back to the settlement. At the next dance in Känuga they told all they had seen at Tsuwa`tel'da, what a large town was there and how kind everybody was, and this time--because there were two of them--the people believed it. Now others wanted to go, but Tsuwe'nähï told them they must first fast seven days, while he went ahead to prepare everything, and then he would come and bring them.

He went away and the others fasted, until at the end of seven days he came for them and they went with him to Tsuwa`tel'da, and their friends in the settlement never saw them again.