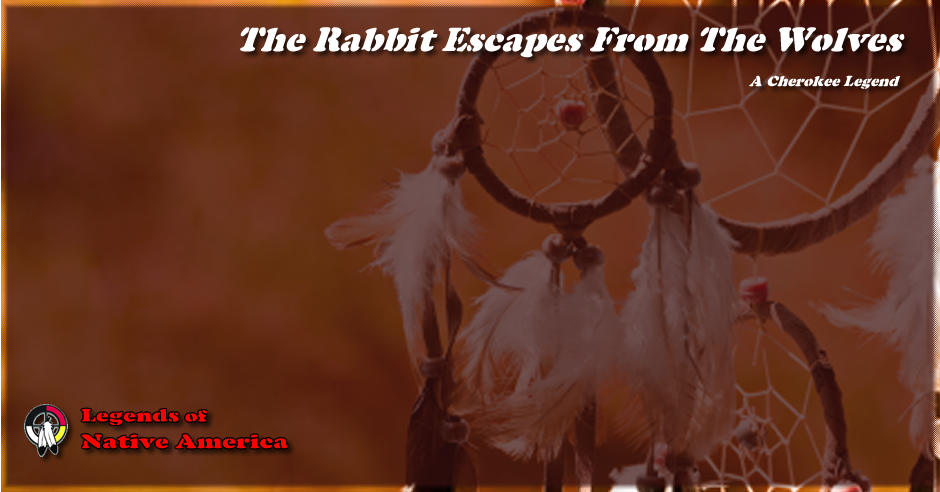 Some Wolves once caught the Rabbit and were going to eat him when he asked leave to show them a new dance he was practicing. They knew that the Rabbit was a great song leader, and they wanted to learn the latest dance, so they agreed and made a ring about him while he got ready.

He patted his feet and began to dance around in a circle, singing:

On the edge of the field I dance about

"Now, said the Rabbit, "when I sing 'on the edge of the field,' I dance that way"--and he danced over in that direction--"and when I sing lïl lïl! you must all stamp your feet hard." The Wolves thought it fine. He began another round singing the same song, and danced a little nearer to the field, while the Wolves all stamped their feet. He sang louder and louder and danced nearer and nearer to the field until at the fourth song, when the Wolves were stamping as hard as they could and thinking only of the song, he made one jump and was off through the long grass.

They were after him at once, but he ran for a hollow stump and climbed up on the inside. When the Wolves got there one of them put his head inside to look up, but the Rabbit spit into his eye, so that he had to pull his head out again.

The others were afraid to try, and they went away, with the Rabbit still in the stump.