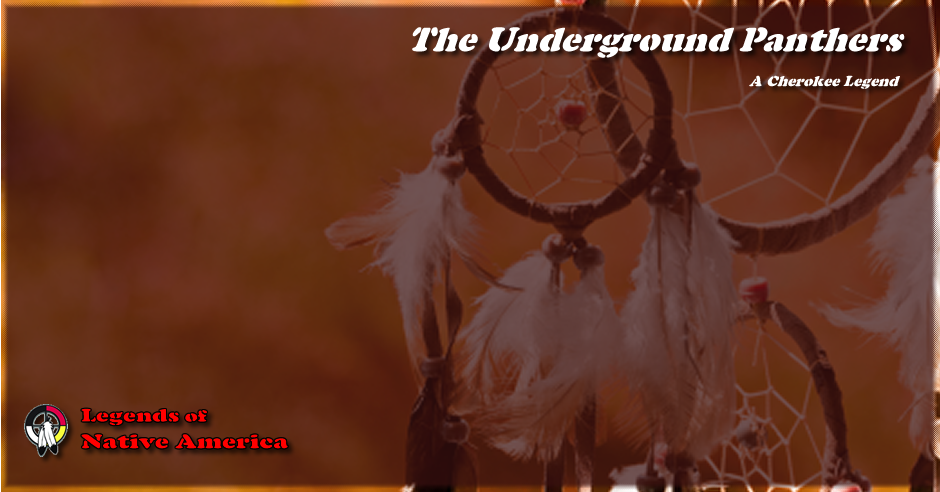 A hunter was in the woods one day in winter when suddenly he saw a panther coming toward him and at once prepared to defend himself. The panther continued to approach, and the hunter was just about to shoot when the animal spoke.

At once it seemed to the man as if there was no difference between them, and they were both of the same nature. The panther asked him where he was going, and the man said that he was looking for a deer.

"Well," said the panther, "we are getting ready for a Green-corn dance, and there are seven of us out after a buck, so we may as well hunt together."

The hunter agreed and they went on together. They started up one deer and another, but the panther made no sign, and said only "Those are too small; we want something better." So the hunter did not shoot, and they went on.

They started up another deer, a larger one, and the panther sprang upon it and tore its throat, and finally killed it after a hard struggle. The hunter got out his knife to skin it, but the panther said the skin was too much torn to be used and they must try again.

They started up another large deer, and this the panther killed without trouble, and then, wrapping his tail around it, threw it across his back. "Now, come to our townhouse," he said to the hunter.

The panther led the way, carrying the captured deer upon his back, up a little stream branch until they came to the head spring, when it seemed as if a door opened in the side of the hill and they went in.

Now the hunter found himself in front of a large townhouse, with the finest detsänûñ'lï he had ever seen, and the trees around were green, and the air was warm, as in summer. There was a great company there getting ready for the dance, and they were all panthers, but somehow it all seemed natural to the hunter. After a while the others who had been out came in with the deer they had taken, and the dance began.

The hunter danced several rounds, and then said it was growing late and he must be getting home. So the panthers opened the door and he went out, and at once found himself alone in the woods again, and it was winter and very cold, with snow on the ground and on all the trees.

When he reached the settlement he found a party just starting out to search for him. They asked him where he had been so long, and he told them the story, and then he found that he had been in the panther townhouse several days instead of only a very short time, as he had thought.

He died within seven days after his return, because he had already begun to take on the panther nature, and so could not live again with men. If he had stayed with the panthers he would have lived.