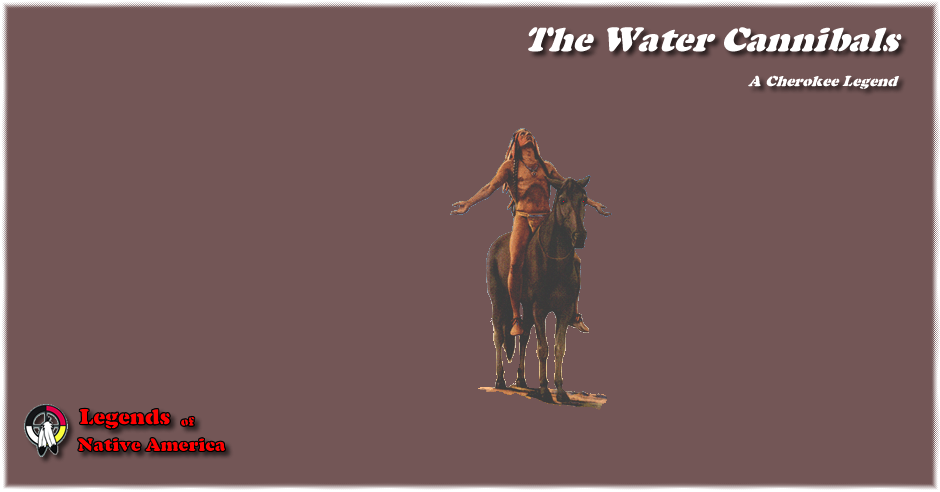 Besides the friendly Nûñnë'hï of the streams and mountains there is a race of cannibal spirits, who stay at the bottom of the deep rivers and live upon human flesh, especially that of little children.

They come out just after daybreak and go about unseen from house to house until they find some one still asleep, when they shoot him with their invisible arrows and carry the dead body down under the water to feast upon it.

That no one may know what has happened they leave in place of the body a shade or image of the dead man or little child, that wakes up and talks and goes about just as he did, but there is no life in it, and in seven days it withers and dies, and the people bury it and think they are burying their dead friend.

It was a long time before the people found out about this, but now they always try to be awake at daylight and wake up the children, telling them "The hunters are among you." This is the way they first knew about the water cannibals: There was a man in Tïkwäli'tsï town who became sick and grew worse until the doctors said he could not live, and then his friends went away from the house and left him alone to die, They were not so kind to each other in the old times as they are now, because they were afraid of the witches that came to torment dying people.

He was alone several days, not able to rise from his bed, when one morning an old woman came in at the door. She looked just like the other women of the settlement, but he did not know her. She came over to the bed and said, "You are very sick and your friends seem to have left you. Come with me and I will make you well."

The man was so near death that he could not move, but now her words made him feel stronger at once, and he asked her where she wanted him to go. "We live close by; come with me and I will show you," said the woman, so he got up from his bed and she led the way down to the water.

When she came to the water she stepped in and he followed, and there was a road under the water, and another country there just like that above.

They went on until they came to a settlement with a great many houses, and women going about their work and children playing.

They met a party of hunters coming in from a hunt, but instead of deer or bear quarters hanging from their shoulders they carried the bodies of dead men and children, and several of the bodies the man knew for those of his own friends in Tïkwäli'tsï. They came to a house and the woman said "This is where I live," and took him in and fixed a bed for him and made him comfortable.

By this time he was very hungry, but the woman knew his thoughts and said, "We must get him something to eat. She took one of the bodies that the hunters had just brought in and cut off a slice to roast. The man was terribly frightened, but she read his thoughts again and said, "I see you can not eat our food." Then she turned away from him and held her hands before her stomach--so--and when she turned around again she had them full of bread and beans such as he used to have at home.

So it was every day, until soon he was well and strong again. Then she told him he might go home now, but he must be sure not to speak to anyone for seven days, and if any of his friends should question him he must make signs as if his throat were sore and keep silent. She went with him along the same trail to the water's edge, and the water closed over her and he went back alone to Tïkwäli'tsï.

When he came there his friends were surprised, because they thought he had wandered off and died in the woods.

They asked him where he had been, but he only pointed to his throat and said nothing, so they thought he was not yet well and let him alone until the seven days were past, when he began to talk again and told the whole story.