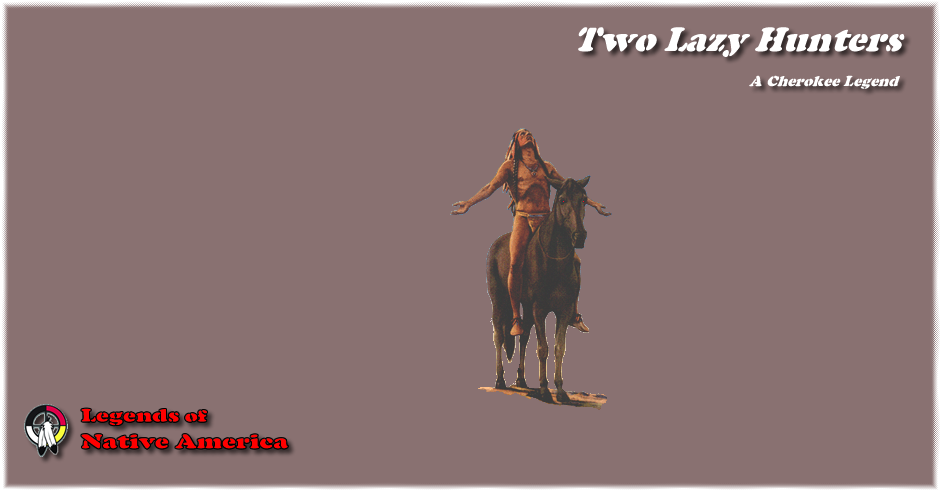 A party of warriors once started out for a long hunting trip in the mountains, They went on until they came to a good game region, when they set up their bark hut in a convenient place near the river side.

Every morning after breakfast they scattered out, each man for himself, to be gone all day, until they returned at night with whatever game they had taken.

There was one lazy fellow who went out alone every morning like the others, but only until he found a sunny slope, when he would stretch out by the side of a rock to sleep until evening, returning then to camp empty-handed, but with his moccasins torn and a long story of how he had tramped all day and found nothing.

This went on until one of the others began to suspect that something was wrong, and made it his business to find it out. The next morning he followed him secretly through the woods until he saw him come out into a sunny opening, where he sat down upon a large rock, took off his moccasins, and began rubbing them against the rocks until he had worn holes in them.

Then the lazy fellow loosened his belt, lay down beside the rock, and went to sleep. The spy set fire to the dry leaves and watched until the flame crept close up to the sleeping man, who never opened his eyes.

The spy went back to camp and told what he had seen. About supper time the lazy fellow came in with the same old story of a long day's hunt and no game started. When he had finished the others all laughed and called him a sleepyhead.

He insisted that he had been climbing the ridges all day, and put out his moccasins to show how worn they were, not knowing that they were scorched from the fire, as he had slept on until sundown.

When they saw the blackened moccasins they laughed again, and he was too much astonished to say a word in his defense; so the captain said that such a liar was not fit to stay with them, and he was driven from the camp.

There was another lazy fellow who courted a pretty girl, but she would have nothing to do with him, telling him that her husband must be a good hunter or she would remain single all her life.

One morning he went into the woods, and by a lucky accident managed to kill a deer. Lifting it upon his back, he carried it into the settlement, passing right by the door of the house where the girl and her mother lived.

As soon as he was out of sight of the house he went by a roundabout course into the woods again and waited until evening, when he appeared with the deer on his shoulder and came down the trail past the girl's house as he had in the morning.

He did this the next day, and the next, until the girl began to think he must be killing all the deer in the woods. So her mother (the old women are usually the matchmakers) got ready and went to the young man's mother to talk it over.

When she arrived and the greetings were done she said, "Your son must be a good hunter."

"No," replied the old woman, "he seldom kills anything."

"But he has been killing a great many deer lately."

"I haven't seen any," said his mother.

"Why, he has been carrying deer past our house twice a day for the last three days." "I don't know what he did with them," said the young man's mother; "he never brought them here."

Then the girl's mother was sure there was something wrong, so she went home and told her husband, who followed tip the young man's trail into the woods until it brought him to where the body of the deer was hidden, now so far decayed that it had to be thrown away.