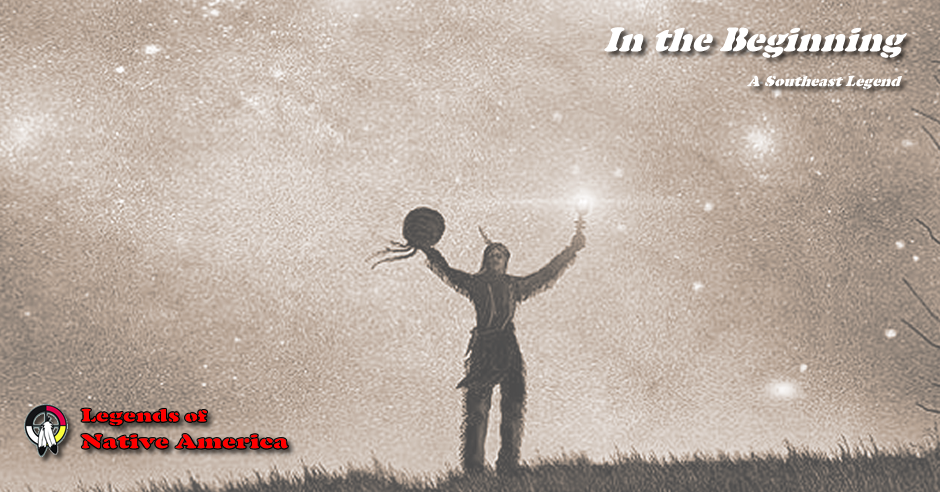 Lock-chew, the Crawfish, said, "I will make the land appear."

So he went down to the bottom of the water and began to stir up the mud with his tail and his claws. He brought up some mud to a certain place and piled it up until it made a mound.

The owners of the land at the bottom of the water said, "Who is disturbing our land?" They kept careful watch and discovered it was Crawfish. When they started toward him, Crawfish stirred up the mud so much with his tail that they could not see him.

Lock-chew continued to pile up mud, until it came out on top of the surface of the great water. This is how land first appeared. It was so soft that Wind said, "Who will spread the land to make it dry and hard?"Hawk and Buzzard appeared. Because Buzzard's wings were larger, he tried first. He flew, fanning the soft earth and spreading it all about. When he flapped his wings, hills and valleys were formed.

"Who will make the light?" Wind asked. It was very dark.

Yo-hah, the Star, said, "I will make light." It was agreed. The Star shone forth, but its light only remained close to the Star.

Shar-pah, the Moon, said, "I will make enough light for all my children and I will shine forever." But the world was still too dark.

T-cho, the Sun, said, "Leave it to me to make enough light for everyone everywhere."

Sun went to the East and suddenly enough light was everywhere. As Sun travelled over the earth, a drop of blood fell from the sky to the ground. From this spot sprang the first people, the children of the Sun they were called, the Yu-chis.

The Yu-chis wished to find their medicine since a large monster had destroyed some of their people. The Yu- chis cut off its head, but the next day its head and body were together again. They killed the monster a second time. Again, its head grew back on its body.

A third time, they cut off its head. They placed the head on top of a tall tree, so the body could not reach the head. The next morning, the tree was dead and the head had rejoined the monster's body. They killed it once more, putting its head at the top of a cedar tree. The next morning the cedar tree was still alive, but covered with blood from the head. The monster remained dead.

This is how the Yu-chis found their great medicine, the Cedar Tree. Fire was soon discovered by boring a stick into some hard, dry weeds.

The Yu-chis selected a second medicine, as each one made a picture of the Sun upon their door.In the beginning, all of the animals could talk with one another. All animals and people were at peace. The deer lived in a cave watched over by a Yu-chis keeper. When the Yu-chis became hungry, the keeper selected a deer and killed it for their food. Finally, all of the deer were set free with the other animals, and a name was given to every animal upon the earth.

This is how it was in the beginning with the first people, the Yu-chis Indian tribe.

Southeastern Indian traditions indicated their belief in an Upper World, a Lower World, and This World, where they, the animals and plants, lived and thrived. Early on in This World, some extraordinary humans and animals came down to visit from Upper World. Later, they returned to their previous world, where they felt more comfortable. Mankind of This World in time learned to resolve frictions and to maintain some order between themselves and the other two worlds. They became mostly villagers and agriculturists with more permanent tribal homes, since they were not nomadic by nature. Their tribes enlarged and prospered as hunters, fishermen, builders, and skilled craftsmen, including the women's abilities in weaving, basketry, and herbal medicines; the latter maintaining the good health of their people.