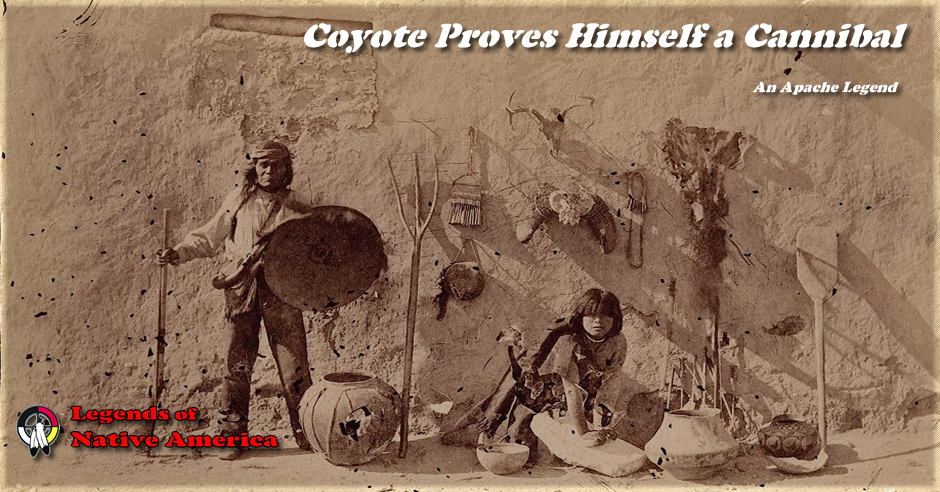 Owl was the one who had arrows. He had a club also with which he killed men whom he ate. "Up at the low gap I am watching for men, wuu hwuu woo," he sang.

Coyote came walking along in front of him. "Wuu hwuu woo," sang Owl, "I am looking for men in the low gap." The two came face to face there.

"Now," said Owl, "the one who vomits human flesh will kill men."
"Very well," said Coyote, "shut your eyes." Owl shut his eyes. When he vomited, Coyote put his hand under and took the meat.

The grasshoppers which Coyote vomited he put in Owl's hand.

"Now open your eyes," said Coyote. Owl looked and saw the grasshoppers lying in his hand. Coyote showed him the meat. "What did I tell you," said Coyote, "this is the meat I threw up."

"Where did I drink in the grasshoppers?" said Owl.

Coyote ran all around Owl. "Because I run fast like this I eat people," said Coyote.

"These legs of yours are too large, I will fix them for you. Shut your eyes." Coyote cut Owl's leg, trimming away the meat. He broke his leg with a stone and took the arrows away leaving him only the club.

Coyote ran around Owl who threw his club at him. He would say, "Come back, my club," and it would come back to him.

He threw it again. "Come here, my club," he called. He hit him with it. Coyote said,"Wherever a stick falls when one throws it there it will lie." The club did not return to Owl.

"Now you will live right here in the canyon where many arrows will be in front of you. Somebody might kill you," Coyote told him.

Owl hitched himself along into the canyon. "Arrows painted black may kill you," said Coyote. Coyote went around in front of him and shot him with his own (Owl's) arrows.

After that everybody was afraid of Coyote, who went around killing off the people.