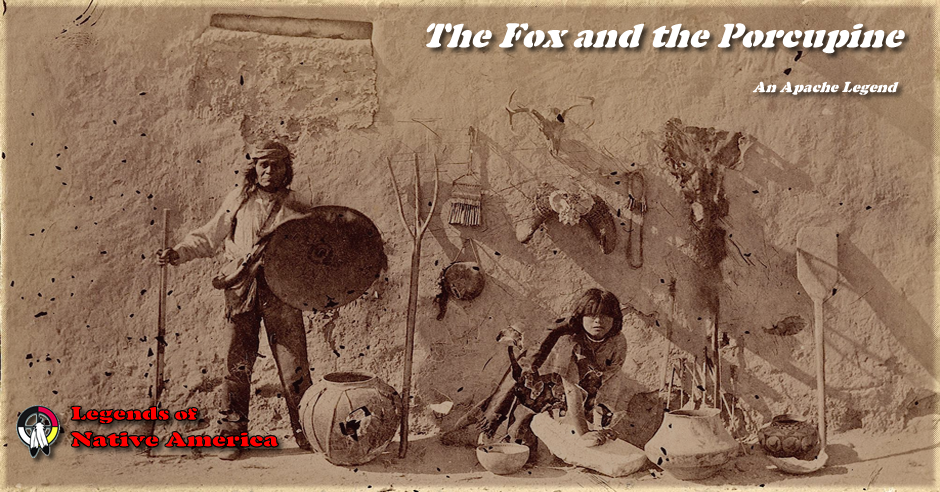 As Fox was going along he met a Porcupine, Tson, which he overheard saying, "I shall search for pêc'-ti, a stone knife, with which to cut up this meat."

"What are you saying?" asked Fox, springing out of the bushes.

"I said that I must hunt for pêc'-ti for arrow-heads," replied Porcupine.

"That is not what you said."

"It was," insisted Porcupine.

"Where is that meat?" asked Fox, and then Porcupine admitted that he had killed a Buffalo.

Porcupine had commanded a Buffalo to carry him across a river.

"Don't shake your head with me, or I shall fall," said he, as he sat between the animal's horns.

The Buffalo told him that, if he was afraid there, he had better crawl into his anus. In that safe retreat Porcupine was carried across the river.

He repaid the service by gnawing the vitals of the Buffalo until it fell dead near where the Fox had come upon him. Fox was not disposed to allow Porcupine to retain possession of the Buffalo.

"Come," said he, " whoever can jump over the Buffalo can have it. You try first."

Porcupine jumped, but only landed on the top of the carcass, over which Fox, of course, leaped with ease. "Now the Buffalo is mine. You can sit over there and see me cut it up."

After cutting up the meat, Fox hastened away to summon all the foxes to a feast. Porcupine carried the meat piece by piece into a treetop, so that the foxes, when they came dancing in joyful anticipation, found nothing.

From a safe position in the tree Porcupine told the foxes that he would throw them down some meat if they would lie down, close their eyes, and cover themselves with their blankets.

They were hungry, so they obeyed the instructions of the Porcupine, who, as soon as their eyes were closed, killed them by throwing down the sharpened ribs of the Buffalo.

One little fox at the end of the line had a ragged old blanket, through which he peeped in time to see and to dodge the rib hurled at him. This fox survived the massacre, and begged Porcupine to give him some meat.

The Porcupine gave him some small pieces at first, and then invited him to come up and eat his fill. The Fox accepted, and, when he could eat no more, asked where he could go to relieve himself.

The Porcupine directed him to the end of a branch, whence he easily shook the Fox, which fell to the ground and was killed, but sprang up alive again at the moment when the first tuft of hair was blown from the putrefying carcass by the wind.