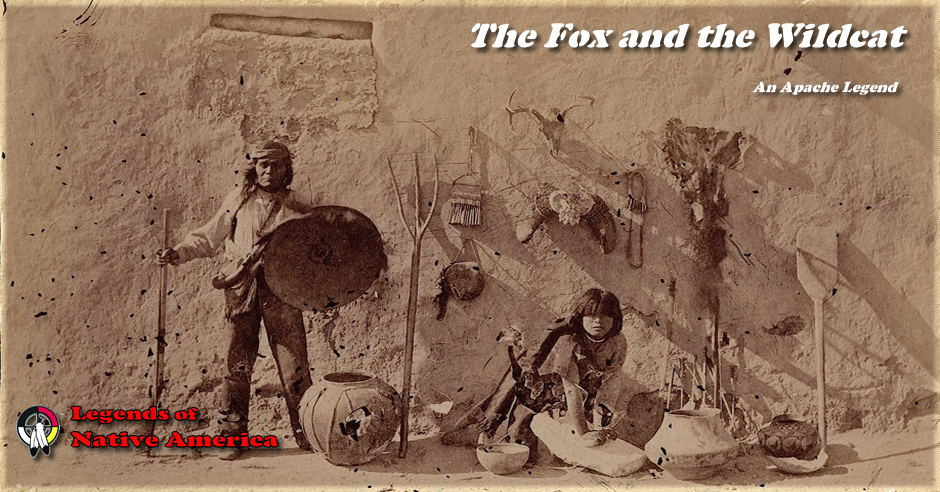 As soon as his life was restored, Fox went to the Buffalo head, and cut off the long pendent hair, i-yûn-e-pi-ta-ga, beneath its under jaw.

Fox took this to a prairie-dog village near at hand, and told the inhabitants that it was the hair of a man, one of that race dreaded by the prairie-dogs because of its attacks upon them, which he had killed. He easily persuaded the prairie-dogs to celebrate his victory
with feasting and dancing. With a stone concealed in his hand, he killed all the prairiedogs as they circled around in the dance.

Fox then placed them in a pit, and built a huge fire over them, leaving them to roast while he slept. Nîn-ko-jîn, the Wildcat, came along, and stole all the roasted prairie-dogs while Fox slept, save one at the end of the pit, leaving the tails, which were pulled off.

Fox awoke after some time, and flew into a great rage when he found only the tails left; the solitary dog was thrown over his shoulder in his fit of passion. The gnawing of hunger soon induced him to search for the dog he had thrown away.

In the stream close by he thought he saw the roasted body; taking off his clothes, he swam for it, but could not grasp it. Again and again he tried, and finally dove for it until he bumped his nose on the stony bottom. Tired out with his efforts, he laid down upon the bank to rest, and, as he glanced upward, saw the body of the prairie-dog lying
among the branches which projected over the water. Fox recovered the coveted morsel, ate it, and set off on the trail of the Wildcat.

He found Wildcat asleep under a tree, around which he set a fire. With a few quick strokes he shortened the head, body, and tail of Wildcat, and then pulled out the large intestine and roasted it.

Fox then awakened Wildcat, and invited him to eat his (Wildcat's) flesh, but to be careful to save a small piece, and put it back in its place, for he would need it. Fox then left him.

Wildcat followed Fox, intent upon revenge. He found Fox asleep, but instead of shortening that animal's members he lengthened them; the ears were only straightened, but the head, body, and tail were elongated as we see them at the present day. The intestine scene was repeated with the Fox as victim.