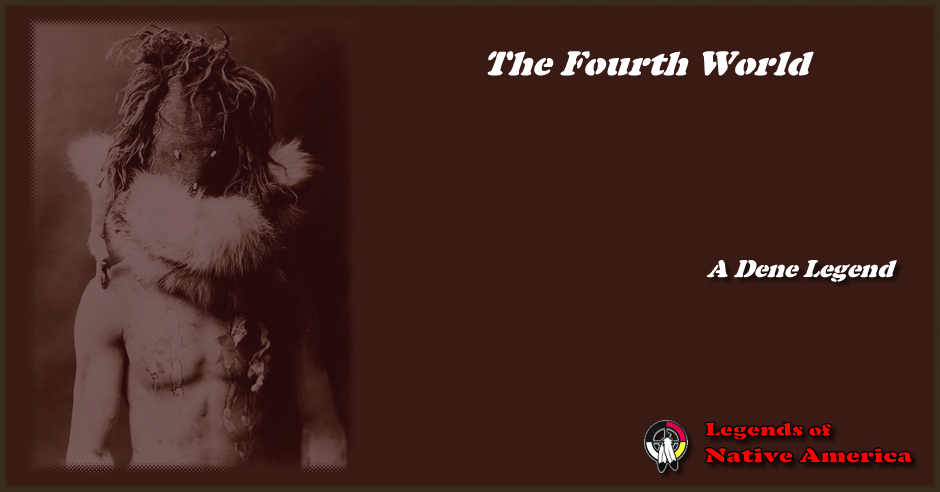 When the people reached the Fourth World they saw that it was not a very large place. Some say that it was called the White World; but not all medicine men agree that this is so.

The last person to crawl through the reed was the turkey from Gray Mountain. His feather coat was flecked with foam, for after him came the water. And with the water came the female Water Buffalo who pushed her head through the opening in the reed. She had a great quantity of curly hair which floated on the water, and she had two horns, half black and half yellow. From the tips of the horns the lightning flashed.

First Man asked the Water Buffalo why she had come and why she had sent the flood. She said nothing. Then the Coyote drew the two babies from his coat and said that it was, perhaps, because of them.

This basket he gave to the Coyote who put it between the horns of the Water Buffalo. The Coyote said that with this sacred offering he would give back the male child. He said that the male child would be known as the Black Cloud or Male Rain, and that he would bring the thunder and lightning.

After the water sank there appeared another person. They did not know him, and they asked him where he had come from. He told them that he was the badger, nahashch'id, and that he had been formed where the Yellow Cloud had touched the Earth. Afterward this Yellow Cloud turned out to be a sunbeam.