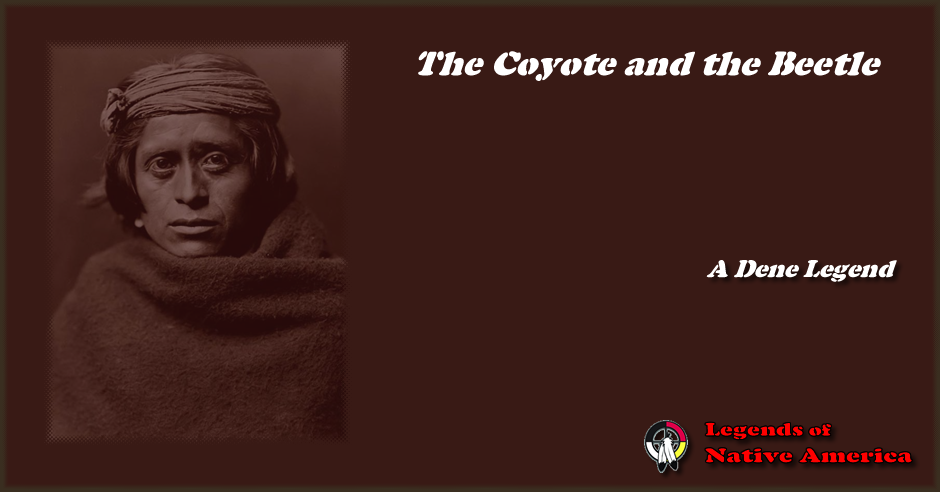 In remote times, after our ancients were settled at Middle Ant Hill, a little thing occurred which will explain a great deal.

My children, you have doubtless. seen Tip-beetles. They run around on smooth, hard patches of ground in spring time and early summer, kicking their heels into the air and thrusting their heads into any crack or hole they find.

Well, in ancient times, on the pathway leading around to Fat Mountain, there was one of these Beetles running about in all directions in the sunshine, when a Coyote came trotting along. He pricked up his ears, lowered his nose, arched his neck, and stuck out his paw toward the Beetle. "Ha!" said he, "I shall bite you!"

The Beetle immediately stuck his head down close to the ground, and, lifting one of his antenna deprecatingly, exclaimed: "Hold on! Hold on, friend! Wait a bit, for the love of mercy! I hear something very strange down below here!"

"Humph!" replied the Coyote. "What do you hear?"

"Hush! hush!" cried the Beetle, with his head still to the ground. "Listen!"

So the Coyote drew back and listened most attentively. By-and-by the Beetle lifted himself with a long sigh of relief. "Okwe!" exclaimed the Coyote. "What was going on?" "The Good Soul save us!" exclaimed the Beetle, with a shake of his head. "I heard them saying down there that tomorrow they would chase away and thoroughly chastise everybody who defiled the public trails of this country, and they are making ready as fast as they can!"

"Souls of my ancestors!" cried the Coyote. "I have been loitering along this trail this very morning, and have defiled it repeatedly. I'll cut!" And away he ran as fast as he could go. The Beetle, in pure exuberance of spirits, turned somersaults and stuck his head in the sand until it was quite turned. Thus did the Beetle in the days of the ancients save himself from being bitten. Consequently the Tip-beetle has that strange habit of kicking his heels into the air and sticking his head in the sand.