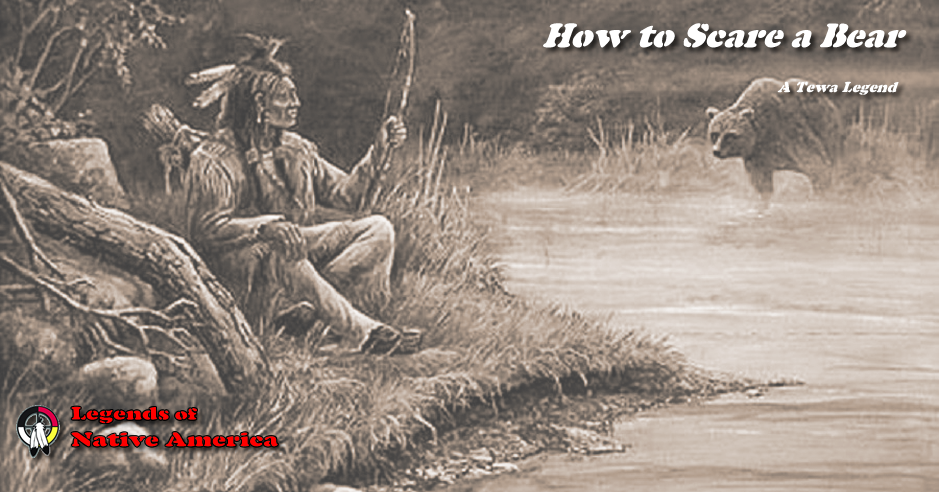 Long ago and far away this did not happen. On tope of Red Rock Hill, lived a little rabbit. Prickly pears were his favorite food, and every day he would hunt for them along the east bank of the Rio Grande. Eventually he ate all the prickly peans o that bank, so he cast his hungry eyes across the river. He said to himself, "I'll bet plenty of them grow over there. Now, how am I going to get across the river to look?"

The rabbit knew the river was too deep and too wide for him to swim on his own, and he sighed, "Oh, how I wish that Uncle Fast Water, who moves the current, were here to take me across."

Fast Water heard and replied, "Child, I'm lying right here. What can i do for you?"

The little rabbit leaped toward the sound, "Uncle, so this is where you live!"

"Yes, this is the place," said his uncle. "What kind of work do you want from me?"

"I want to cross the river to pick prickly pears, but the wate is too deep and too wide for me. Will you help me get across?"

Fast Water agreed, so the little rabbit sat on top of his head. "Splash! Splash! Splash!" went the water, and quickly the two were on the other side. "Be sure and call me when you want to come back," Fast Water said when they landed.

The rabbit wanted to get home before night fell, so he wasted no time but went right to picking and eating prickly pears.

"My! What a pretty necklace you have."

I want to make a bet with you for that necklace," said Brother Bear. "I'm willing to bet my red necklace for yours. If I win, you'll give me yours, and if you win, I'll give you mine." Little rabbit agreed, and they arranged to meet at noon the next day in the same spot.

That afternoon the little rabbit returned to the river, an dhis uncle easily carried him back across the water.

"Tomorrow you must wait for me, Uncle. I have placed a bet with Brother Bear, and I'll need you to carry me across the river again!"

The next day the little rabbit got up early and hurried to meet Brother Bear. Because of hie early start, he arrived first and decided to strol in the woods. As he was hopping around, he spotted an old horse bell that still had a dried-up piece of leather tied to it. He hung it around his neck, and wih each jump the bell went "Clank! Clank!" The little rabbit said to himself, "I think this bell will come in very handy with Brother Bear." And he hid the bell carefully in the woods.

"Yes," answered the little rabbit, but he said nothing more.

The two picked a place in the dense wooded area to have their contest. Then Brother Bear made a circle on the ground with a stick.

"Oh, no," said the little rabbit. "You wanted to bet, and you should go first."

"Yes, I'll go first. I'll bet you I'm the braver of us two. See that circle? You sit in it, and if you move evn a little from where you're sitting I win."

Little Rabbit said down, and Brother Bear took off into the woods. A few minutes later the rabbit heard strange sounds:

"I know that's Brother Bear," thought the little rabbit. "He's trying to scare me, but I won't move.

Closer and closer came the strange sounds. Suddenly, with a crash a great big treee came tumbling down and barely missed the little rabbit.

"You moved! You moved! I saw you move!" shouted Brother Bear.

"No, I don't move. Come and see for yourself," answered the rabbit.

Brother bear couldn't find any foot makrs and had to agree that the little rabbit had not moved at all.

Little Rabbit said to Brother Bear, "Now you must sit in this circle as I did in yours." The rabbit drew a circle, and Brother Bear sat in it.

Leaving Brother Bear sitting in the circle, the rabbit headed into the woods. He just put the old horse bell around his neck and headed toward the place where Brother Bear was waiting.

After he had hopped a few steps, the little rabbit stopped, rang the horse bell, and sang:

Where are you sitting, my bear friend?

When Brother Bear head this, he thought, "That's not my friend Little Rabbit. This is something else altogether."

Coming closer to the circle where Brother Bear was sitting, the little rabbit rang his horse bell louder and sang his song once more.

Brother Bear, growing really frightened, stood up and ran. The little rabbit jumped out and called, "You've lost! Let me have your necklace!"