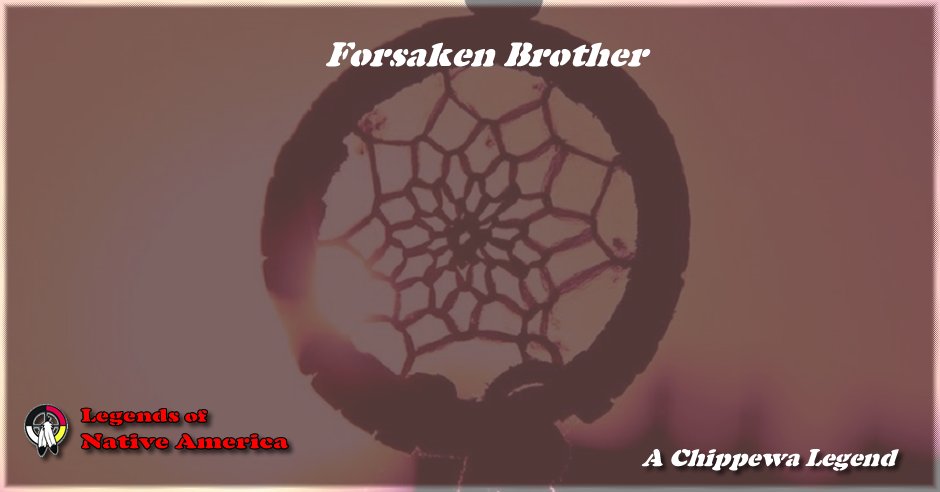 One summer evening, scarcely an hour before sunset, the father of a family lay in his lodge, dying. Weeping beside him were his wife and three children. Two of them were almost grown up; the youngest was but a small child.

These were the only human beings near the dying man, for the lodge stood on a little green mound away from all others of the tribe.

A breeze from the lake gave the sick man a brief return of strength. He raised himself a little and addressed his family.

"I know that I will leave you soon. Your mother, my partner of many years, will not stay long behind. She will soon join me in the pleasant land of spirits. But, O my children, my poor children! You have just begun life. All unkindness and other wickedness are still before you.

"I have contented myself with the company of your mother and yourselves for many years, in order to keep you from evil example. I will die content, my children, if you will promise me to love each other. Promise me that on no account will you forsake your youngest brother. I leave him in your charge. Love him and hold him dear."

"Never, never!" they both exclaimed.

"Never, never!" repeated the father. And then he died, happily sure that his command would be obeyed.

Time wore heavily away. Five long moons passed, and when the sixth moon was nearly full, the mother also died. In her last moments she reminded the two older children of their promise to their father. Willingly they renewed their promise to take care of their little brother. They were still free from any selfishness.

The winter passed away, and spring came. The girl, the oldest, directed her brothers. She seemed to feel an especially tender and sisterly affection for the youngest, who was sickly and delicate. The older boy, however, already showed signs of selfishness. One day he spoke sharply to his sister.

"My sister, are we always to live as if there were no other human beings in the world? Must I never associate with other men? I am going to visit the villages of my tribe. I have made up my mind, and you cannot prevent me."

"My brother," replied his sister, "I do not say no to what you wish. We were not forbidden to associate with others, but we were commanded never to forsake each other. If we separate to follow our own selfish desires, will we not be compelled to forsake our young brother? Both of us have promised to take care of him."

Making no reply, the young man picked up his bow and arrows, left the wigwam, and returned no more.

For many moons the girl took kindly care of her little brother. At last however, she too began to weary of their solitude and wished to escape from her duty. Her strength and her ability to provide food and clothing had increased through the years, but so had her desire for company. Her solitude troubled her more and more, as the years went slowly by. At last, thinking only of herself, she decided to forsake her little brother, as the older brother had already done.

One day, she placed in the lodge all the food she had gathered. After bringing a pile of wood to the door, she said to her young brother, "Do not stray far from the lodge while I am gone. I am going to look for our brother. I shall soon be back."

Then taking her bundle, she set off for the villages. She found a pleasant one on the shore of a lake. Soon she became so much occupied with the pleasures of her new life that her affection for her brother gradually left her heart. In time, she was married. For a long time, she did not even think of the sickly little brother she had left in the woods.

In the meantime the older brother had settled in a village on the same lake, not far from the graves of their parents and the solitary home of the little brother.

As soon as the little fellow had eaten all the food left by his sister, he had to pick berries and dig roots. Winter came on, and the poor child was exposed to its cold winds. Snow covered the earth. Forced to leave the lodge in search of food, he strayed far without shelter. Sometimes he passed the night in the crotch of an old tree and ate the fragments left by wolves.

Soon he had to depend for his food entirely on what the wolves did not eat. He became so fearless that he would sit close to them while they devoured the animals they had killed. His condition aroused the pity of the animals, and they always left something for him. Thus he lived on the kindness of the wolves until spring came. As soon as the lake was free from ice, he followed his new friends and companions to the shore.

Now it happened that his brother was fishing in his canoe, far out on the same lake, when he thought he heard the cry of a child. "How can any child live on this bleak shore?" he said to himself. He listened again, and he thought he heard the cry repeated. Paddling toward the shore as quickly as possible, he saw and recognized his brother. The young one was singing, My brother, my brother! I am now turning into a wolf. I am turning into a wolf!

At the end of his song, he howled like a wolf. His brother, approaching, was shocked to find him half a wolf and half a human being. Leaping to the shore, the older brother tried to catch him in his arms. Soothingly he said, "My brother, my brother, come to me!"

Conscience-stricken, feeling his love return to his heart, his brother called to him, "My brother, O my brother! Come back to me!"

But the nearer he came to the child, the more rapidly the change to a wolf took place. Still the younger brother sang his song, and still he howled. Sometimes he called on his brother, and sometimes he called on his sister. When the change was complete, he ran toward the wood. He knew that he was a wolf. "I am a wolf! I am a wolf!" he cried, as he bounded out of sight.

The older brother, all the rest of his life, felt a gnawing sense of guilt. And the sister, when she heard what had happened to her little brother, remembered with grief the promise she had solemnly made to their father. She wept many tears and never ceased to mourn until her death.