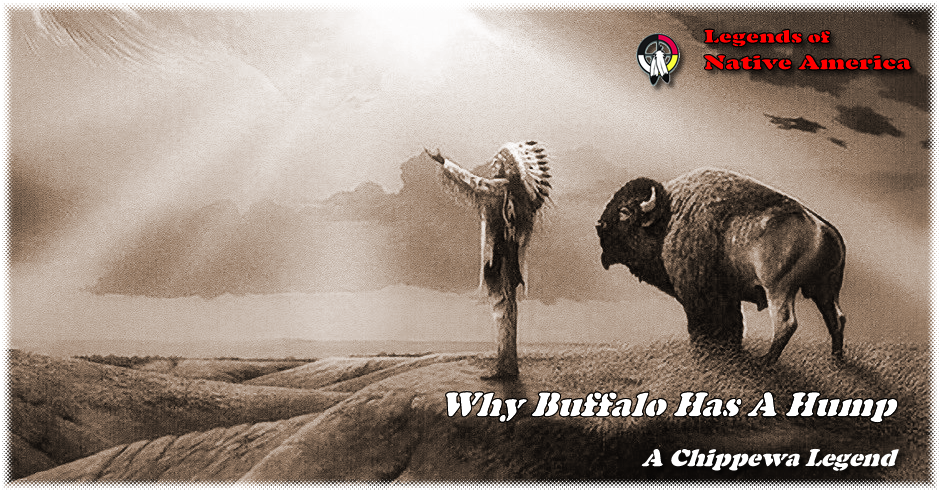 Long ago, when the world was very young, the buffalo had no hump. He got his hump one summer because of his unkindness to birds. He liked to race across the prairies for fun. The foxes would run ahead of him and tell the little animals that their chief, the buffalo, was coming.

One day when Buffalo was racing across the plains, he went in the direction of the place where little birds live on the ground. They called to him and to the foxes that he was going where their nests were, but neither paid any attention to them. Buffalo raced on and trampled the bird's nest under his heavy feet. Even when he heard the birds crying, he ran on without stopping.

No one knew that Nanabozho was near. But he had heard about the birds' ruined home, and was sorry for them. He ran ahead, got in front of Buffalo and the foxes, and stopped them. With his stick he hit Buffalo on the shoulders, hard. Fearing that he would receive another blow, Buffalo humped up his shoulders. But Nanabozho only said, "You shall always have a hump on your shoulders, from this day forth. And you shall always carry your head low for shame."

The foxes, thinking to escape from Nanabozho, ran away, dug holes in the ground, and hid themselves. But Nanabozho found them and gave them their punishment, "Because you where unkind to the birds, you shall always live in the cold ground."

Ever since then, foxes have had their homes in holes in the ground and buffaloes have had humped shoulders.