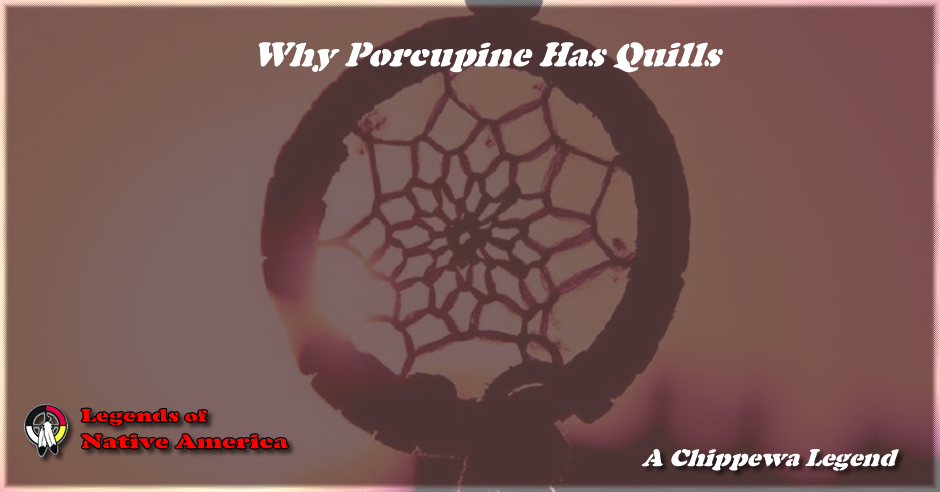 Long ago, when the world was young, porcupines had no quills.

One day, when Porcupine was in the woods, Bear came along and wanted to eat him. But Porcupine climbed to the top of a tree and was safe.

The next day, when Porcupine was under a hawthorn tree, he noticed how the thorns pricked him. He had an idea. He broke off some of the branches of the hawthorn and put them on his back. Then he went into the woods and wait for Bear.

When Bear sprang on Porcupine, the little animal just curled himself up in a ball. Bear had to go away, for the thorns pricked him very much.

Nanabozho saw what happened. He called Porcupine to him and asked, "How did you know that trick?"

"I am always in danger when Bear comes along," replied Porcupine. "When I saw those thorns, I thought I would use them."

So Nanabozho took some branches from the hawthorn tree and peeled off the bark until they were white. Then he put some clay on the back of Porcupine, stuck the thorns in it, and made the whole a part of his skin.

Porcupine obeyed, and Nanabozho hid himself behind a tree. Soon Wolf came along. He sprang on Porcupine and then ran away, howling.

Bear came along, but he did not get near Porcupine. He was afraid of those thorns.

That is why all porcupines have quills today.