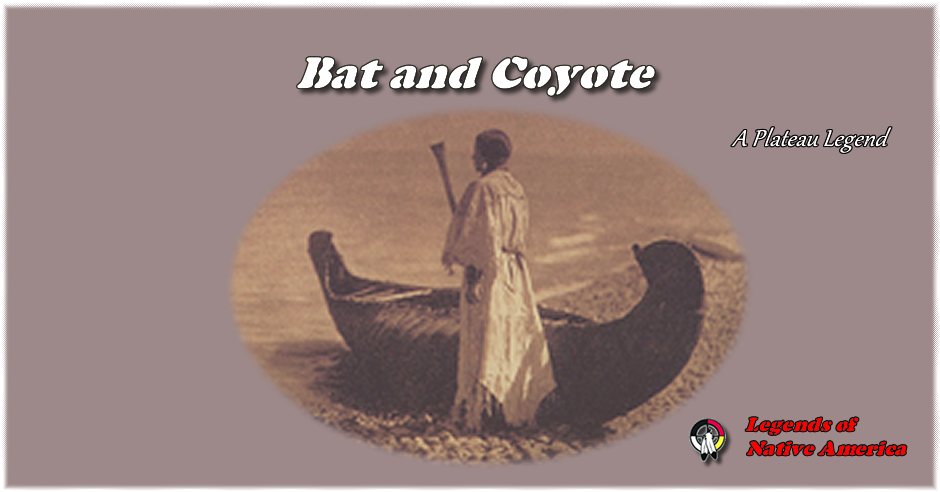 Many people dwelt nearby. There was an old woman who had a daughter, a beautiful maiden. They lived near a river. Across this river, on the other shore, Bat [u'ts' uts] lived alone. He was young, and he was known as Bat-Youth. He owned all kinds of good thing such as soft, furry robes and skins. He had all kinds of things.

Coyote [itsaya' ya] thought up a scheme in connection with Bat. Coyote built a canoe and paddled across the river to Bat's lodge. He arrived there and addressed Bat in these words, "I came across only to see you. How is it, Bat-Youth, that this state of affairs exists? Across the river is a maiden who lives with her mother. A long time ago you had an elder brother, and his wife was the eldest daughter of this maiden's mother. And now, this maiden, the youngest daughter, and you are rightly mates according to marriage custom."

"Yes?" Bat replied. "I did not know these things about myself."

Coyote continued, "Here you live in a good lodge. You have all kinds of valuable possessions, and why should you not bring this maiden here?" As a matter of fact, however Bat was a very homely youth, and that is why Coyote lied to him and convinced him about these matters.

Bat said, "Yes, that is what I will do. I did not know about myself before. It is good that you have told me. I will go across the river to this maiden."

"Yes," Coyote replied, "but exactly when will you come? I will speak to the maiden and have her meet you."

Then Bat told Coyote when he would go across the river. Here foolish Bat began to prepare for departure. He packed up cushions, skins, and many other things. "Now I am ready," he finally said. He went down to the shore and began to shout in his own peculiar words ["ta' qats, taqatslu' ya"] by way of summoning someone across the river to come after him.

"Somebody is over on the other shore shouting to be ferried across. I wonder who he is?" the people commented to one another.

But Coyote knew. "He is coming," he thought. And he went over to the maiden and said to her, "You should paddle across. I am very busy myself. It is Bat, and you can ferry him across." The maiden went down to the shore and put out in a canoe. In a little while she landed on the shore and put the canoe in position for her passenger to step aboard easily.

Bat stood there, but he made no move to get into the canoe. Then he began to waggle his head as if to tell the maiden, "Point the bow of the canoe upstream." She did what he seemed to want. Then Bat waggled his head by way of saying, "Pull forward a little." The maiden did this, and now the canoe rested flush against the ground along its whole length Bat was most elaborately dressed. Suddenly he ran over to where the maiden sat in the stern of the canoe, jumped on her knee, and sat there. There he was perched on her knee.

"What is he doing?" the maiden thought. She tried to paddle the canoe, but she was so encumbered by Bat's presence on her knee that she could scarcely make headway. She managed at last to paddle across. The canoe had no more than touched shore when Bat jumped ashore ahead of her. There was a sudden jangle of his adornments as he alighted on he ground. The maiden got out of the canoe and tied it up. Then she started home, but Bat followed her along-followed her right home. The maiden entered her lodge and sat down. Bat followed her inside and again he hopped on her knee and sat there. There sat Bat when Coyote arrived.

Coyote began to whittle shavings from a piece of cedar wood. He said to Bat, "So this is what you have decided to do, Bat? It is good that you have come. You must have thought, 'Because they were thus once, that, of course, is what is always done.' " There sat Coyote busily cutting cedar shavings.

But now the old woman, the maiden's mother, wondered, "What is he talking about? There were never any such relations. I never had a daughter like that."

Then the maiden began to weep. "So this is what they are doing!" she realized. Bat leaned over to her and said, "Do not weep. I still have many other skins there across the river. Let them take these."

Bat thought she was weeping because they were taking those things which he had brought. So Bat talked to the maiden and tried to soothe her feelings. Coyote talked on incessantly while he whittled cedar shavings. He kept lying as he talked.

The women wondered, "Whatever is he talking about?" Bat sat there, his eyes indiscernible.

Bat rushed out of the door and ran pell-mell down toward the shore, his adornments jingling at every step. He ran right up to a canoe, jumped aboard, and pulled for the opposite shore. There he landed, and with a push of the foot he sent the canoe back across. Then he went home-nor was anyone likely to see him again. He still lives there.

There at the maiden's lodge Coyote continued to laugh and laugh. "That he should think, 'Let me marry by prerogative!' " he declared. Thus Coyote played a practical joke on Bat. But when did Coyote ever show respect for anyone?