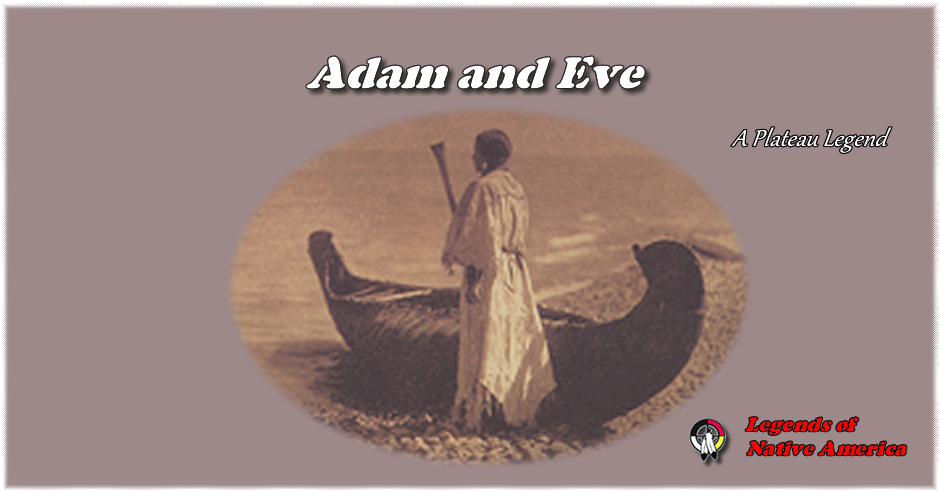 When this earth was very young, only two people lived on it,--a man called A'taam and a woman called Iim. The Chief (or God) lived in the upper world, and the Outcast (or Devil) lived in the lower world. They were enemies to each other, and tried to do each other harm, but God was the more powerful. He frequently visited the earth and talked with A'taam and Iim.

One day the Devil created an animal like a horse, and made it appear before the man and woman. When the latter saw it, she said, "That is God come to visit us"; but A'taam said it was not. At last, however, he believed it must be God, and they went and spoke with it. Soon afterwards God appeared, and then they recognized the difference. He was angry and said, "Why do you mistake the Devil for me and converse with him? Have I not told you he is evil, and will do you harm?" Then, looking at the animal, he said to the couple, "Well, since this beast is here, I will so transform him that he will be useful to you."

He wetted both his thumbs, pressed them on the animal's front legs, and thus marked him, saying, "Henceforth you will be a horse and a servant and plaything of the people, who will ride you, and use you for many purposes. You will be a valuable slave of man." Now the mosquitoes were tormenting the horse very much, so God plucked some long grass which grew near by, and threw it at the animal's backside, and it became a long tail. He also threw some on the horse's neck, and it became a mane. He said, "Henceforth you will be able to protect yourself from the mosquitoes."

Then he plucked out more grass, and threw it ahead of the horse, saying, "That will be your food." It turned into bunch grass, which soon spread over the whole country.

Now God departed, telling the man and woman he would soon return and show them which trees bore the proper kinds of food to eat. Hitherto they had eaten no fruit, for they did not know the edible varieties. At that time all trees bore fruit, and the pines and firs in particular had large sweet fruit. Now the Devil appeared, and, pretending to be God, he took the large long fruit of the white pine, and gave it to him.

She thought he was God, ate the fruit as directed, and gave some to A'taam. Then the Devil disappeared; and all the fruit on the trees withered up, and became transformed into cones. Some kinds shriveled up to a small size, and became berries. When God came and saw what had happened, he sent the woman to live with the Devil, and, taking A'taam, he broke off his lower rib, and made a woman out of it. This rib-woman became A'taam's wife, and bore many children to him.

Adam and Eve A Thompson Legend