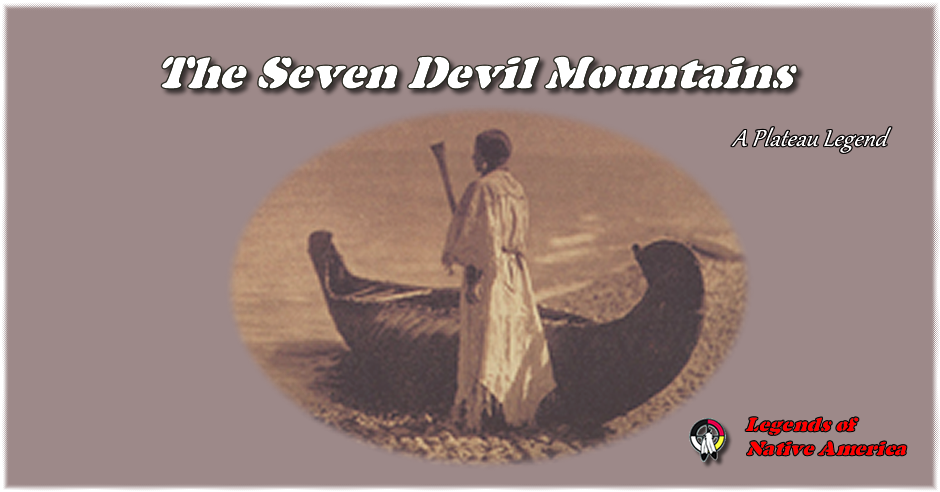 Long long ago when the world was very young, seven giant brothers lived in the Blue Mountains . These giant monsters were taller than the tallest pines and stronger than the strongest oaks.

The ancient people feared these brothers greatly because they ate children. Each year the brothers traveled eastward and devoured all the little ones they could find. Mothers fled with their children and hi them, but still many were seized by the giants. The headmen in the villages feared that the tribe would soon be wiped out. But no one was big enough and strong enough to fight with the seven giants at a time.

At last the head men of the tribe decided to ask Coyote to help them. "Coyote is our friend," they said. "He has defeated other monsters. He will free us from the seven giants."

So they send a messenger to Coyote. "Yes, I will help you," he promised. "I will free you from the seven giants."

"We will first dig seven holes," said his good friend Fox. "We will dig them very deep in a place the giants will always pass over when they travel to the east. Then we will fill the holes with boiling liquid."

So Coyote called together all the animals with claws -- the beavers, the whistling marmots, the cougars, the bears and the rats and mice and moles -- to dig seven deep holes. Then Coyote filled each hole with a reddish-yellow liquid. His good friend Fox helped him keep the liquid boiling by dropping hot rocks into it.

Soon the time came for the giants' journey eastward. They marched along, all seven of them, their heads held high in the air. They were sure that no one dared to attack them. Coyote and Fox watched from behind some rocks and shrubs.

Down, down down the seven giants went into the seven deep holes of boiling liquid. They struggled and struggled to gt out but the holes were very deep. They fumed and roared and splashed. As they struggled they scattered the reddish liquid around them as far as a man can travel in a day.

Then Coyote came out from his hiding place. The seven giants stood still. They knew Coyote.

"You are being punished for your wickedness," Coyote said to the seven giants. "I will punish you even more by changing you into seven mountains. I will make you very high, so that everyone can see you. You will stand here forever to remind people that punishment comes from wrongdoing."

"And I will make a deep gash in the earth here, so that no more of your family can get across to trouble my people."

Coyote caused the seven giants to grow taller, and then he changed them into seven mountain peaks. He struck the earth a hard blow and so opened up a deep canyon at the feet of the giant peaks.

Today the mountain peaks are called "The Seven Devils." The deep gorge at their feet is known as Hell's Canyon of the Snake River . And the copper ore scattered by the splashing of the seven giants is still being mined there in that area.

The myth given here was corroborated and details were added by Caleb Whitman, a Nez Perce on the Umatilla Reservation, in August 1950.