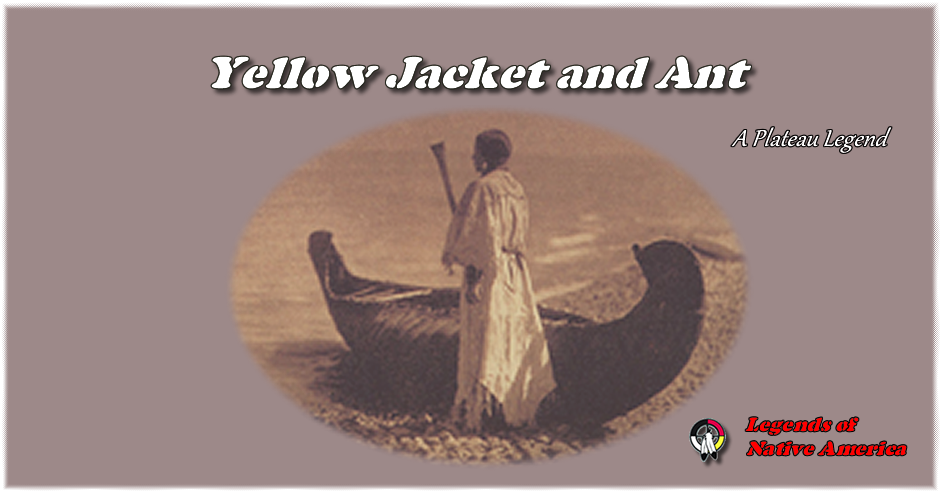 Envy will cause good friends to become enemies. Ant was jealous of Yellow Jacket eating salmon, even though he himself had as much food and comforts of living. Ant invaded his neighbor's privacy and destroyed their friendship. Because neither would listen to his warning, Coyote turned them both into stone as an example for the Human Beings who were coming.

The Yellow Jackets and the Ants all lived together on the hillside about ten miles above Tse-me-na-kem (Lewiston, Idaho). on the Clearwater River. The two families were quite friendly, although every once in a while members would get into an argument , which is no more than natural.

There was quite a bit of jealousy between the Chief of the Yellow Jackets and the Chief of the Ants. This was not real hatred, but each saw to it that his rights were not harmed. On the whole, the two bosses got along pretty well, considering their gossiping wives and their many children.

Chief Yellow Jacket was used to eating his meals on top of a certain rock, and he liked dried salmon the best. One day, he was seated on this rock, calmly eating a big dish of dried salmon which his wife had set before him.

Along came Chief Ant, and seeing Chief Yellow Jacket calmly eating his dinner, he became very angry. It is true that there were other rocks around for him to use, and he could have had dried salmon if he wished, but the sight of Chief Yellow Jacket ma de him very angry. "Hey there, you Yellow Jacket," he shouted at him, "What are you doing on the rock? I have as much right there as you. You can't eat there without asking me."

Chief Yellow Jacket looked up in surprise. "Why, Ant, what are you shouting about? I have always eaten my dinner on this rock."

"That makes no difference," said the Ant. "Why didn't you ask me about it?"

Yellow Jacket had by this time become very angry too. He rattled his wings and snapped his legs and yelled, "None of your business, you little runt."

"Don't call me a runt," shouted Ant. "Nobody can insult me that way."

So saying that, Ant climbed up the side of the rock, and he and Yellow Jacket began to fight all over it. They fought face to face, and with arms locked about each other, they reared up on their hind legs, biting and poking for all they were worth.

Suddenly a great voice boomed out, "Here, you Ant and Yellow Jacket, stop that fighting."

It was Coyote, who happened to be passing down on the other side of the river. He had seen them struggling, but neither of them heard him because they were too busy fighting.

Again Coyote shouted, "You, Ant, and you, Yellow Jacket, I order you to stop fighting. My subjects cannot fight. There is plenty of room and plenty of food for all of us, so why be foolish?"

This time they heard, but neither of them would stop. A third time Coyote warned them, "This is the last time. I'm going to tell you now. Stop fighting or I shall turn you both into stone. You will no longer be great, for the La-te-tel-wit (Human Beings) are coming.

They paid no heed, so Coyote used his magic medicine, waved his paws, and just as Ant and Yellow Jacket were arched together, Coyote turned them to stone.

To this day they remain for all to see, locked in each others arms on top of the big rock where Yellow Jacket ate his meals, but which became a battle ground because of greed.