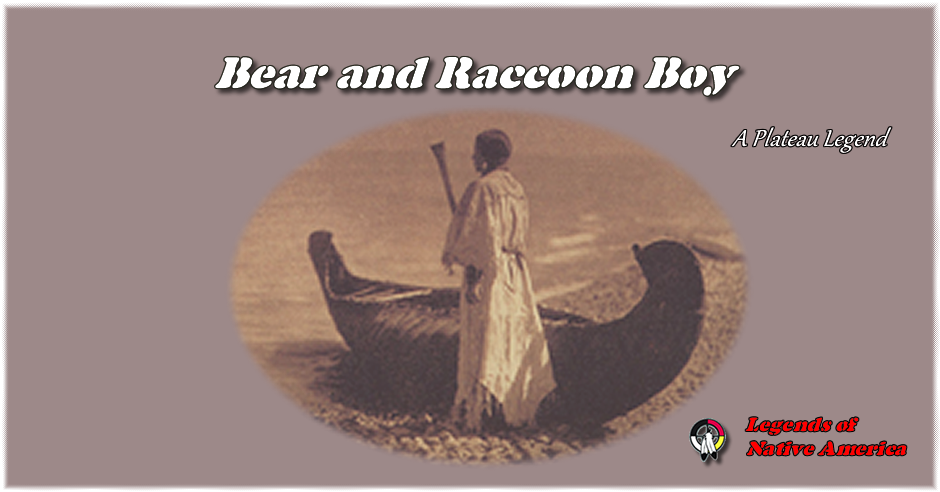 Raccoon Boy [k'ayk'ayo' tshatswal] and his grandmother were dwelling nearby. He would go around looking for crawfish because he was very fond of them. He would devour them on the spot with a crunching noise, and he never thought of saving any to take home. Thus, one day he went along the stream searching for crawfish when, suddenly, he felt a strange presence hovering about him. He turned quickly and beheld a female Bear watching him. He was frightened, but he did not move. He remained very still until the Bear started to come toward him. Then he fled; he ran and climbed up a tree in great haste. The Bear dashed in pursuit and climbed right up the tree after him.

The Bear [xa' xats] said to him, "Nephew, something has crawled into my ear. Take this needle and try to remove it for me." She had many thorn needles pinned here and there on her body.

"Oh, that she should say this!" Raccoon Boy thought. "I will finish her with this very thing." The Bear gave him the thorn needle, and he inserted it gently. But, suddenly, he plunged the needle deep into her ear and pierced her. Oh, she fell backwards and tumbled to the ground. She moaned a few moments ["an, an"] and was dead.

Raccoon Boy remained very still and watched her from above. He was afraid to descend. "It might be that she only pretends to be dead." He threw pieces of bark at her. "She is dead all right." He descended from the tree and went home. "Grandmother, I have killed a Bear," he informed her.

"Hush! You speak of a very fearsome one."

"Yes, but I have already killed her. Come, let us go to carve her." Now they went, and truly enough there lay the Bear. Raccoon Boy and his grandmother then carved the body, packed the meat, and took it home. There they put it to roast in a fire pit; they made a barbecue.

Now just as they had arranged everything, the boy's grandmother accidentally gashed her hand with a knife. "Oh, grandson, I have cut my hand."

"Let me see," replied Raccoon Boy. "Ha, you are on your moon time. You will blight my hunting power.* Hurry and build for yourself a separate lodge."

"No, grandson, I have only cut my hand."

"Hurry and build a lodge. You are on your moon time," insisted Raccoon Boy. And now she went off to the side and built a lodge to which she moved her things and where she stayed in isolation.

Alone now, Raccoon Boy went over to the barbecue and found that it had roasted to perfection. At the roasting pit he began to eat Bear meat, and while doing so he started a deception. He began to talk loudly to himself, "Oh, you have come just in time. I killed a Bear, and here I've roasted it in this pit." He talked to himself in this manner to give his grandmother the impression that some people had come. Thus she would not suspect that he had eaten all the roast by himself. Raccoon Boy lied, "Oh yes! Of course, take some along with you." But there he sat and ate. "Wait! You have gone off and left your dog." Here he quickly ran a little distance away and whistled for an imaginary dog. He returned at once and said, "Yes, now he follows you."

He ate up all the meat, and he even sucked the marrow from the bones. He had deprived his grandmother by his gluttony. Then he went over to her and said, "We had guests and their voracity has deprived us of food. They have taken all. But now you may return to the lodge." His grandmother took her things and went back to their lodge.

Presently she went over to the roasting pit. "Oh, here is some marrow still left," she exclaimed.

His grandmother now became offended, and she began to suspect him.

"Very likely not guests ate up all the meat." Then she, the poor offended one, gnawed at the bones. The grandmother was deeply offended. "Now I leave him." And she left, taking a bearskin with her. She went to a large patch of brush, and there she lay down in Bear fashion with the skin wrapped around her.

Soon the boy became lonely. "My grandmother has gone somewhere. Perhaps she went to dig roots." He spent the evening alone. He became frightened and so lonely that he cried. He began to chant weepingly, "Hurry, hurry, oh hurry. Evening shadows come, and my grandmother will then come home from digging." He spent the evening in lonely silence. That night he cried himself to sleep. On the following morning at dawn, he was still alone. The day passed. Now he thought, "I must have offended my grandmother. I will go to search for her."

He went; he looked for his grandmother. Then he saw smoke curling up from a dense patch of brush. "Ah, then she is here making dried root loaf for me."

The grandmother heard him coming. Then she saw him approaching. She lay there. Raccoon Boy came up to her, and then very suddenly she sprang to her feet. "Why should I be making dried root loaf for you? In a short time the human race will come, and then they will say about you, 'There is Raccoon Boy looking for crawfish. He deprived his grandmother of food by his gluttony.' " Now she rushed furiously at the boy and crushed him to death in her jaws.