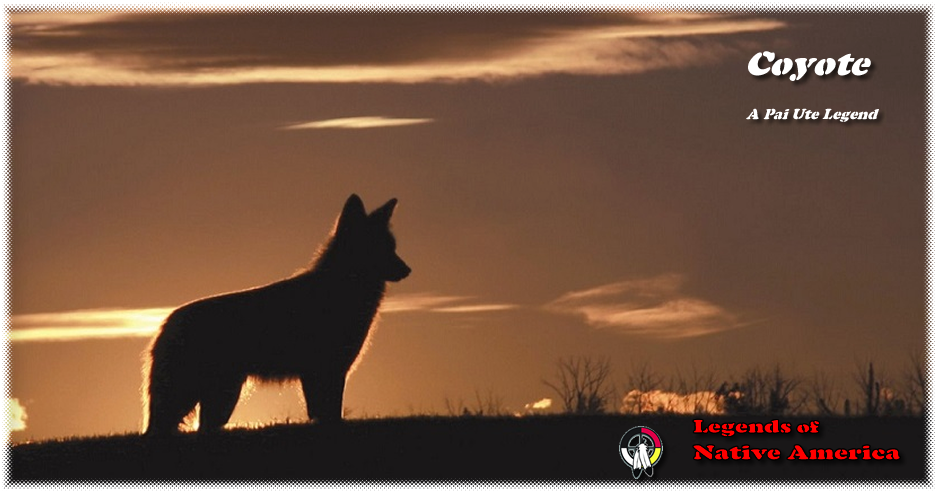 The coyote, like his brother the wolf, was a spiritual being. In the beginning the coyote left his homeland in the Americas and traveled East-ward across the ocean in the direction of the rising sun. In distant lands, he acquired a bride and with her had a great number of children. These children were Indians, the forefathers of the great tribes that were to inhabit the North and South American continents.

Preparing to return home, the coyote put them all in a wosa, a woven willow basket jug with a cork. Before his journey, he was instructed not to open the jug until he reached his country in the Rockies and the Great Basin.

Being a sly and curious person, and hearing singing and the beating of drums within the wosa, the coyote thought it would not hurt to take a peek when he arrived back on the Eastern coast of the American continent. But when he opened the jug, the children inside jumped out and scattered in all directions across North and South America.

By the time he got the cap back on, the only two persons who remained in the wosa were the Western Shoshone and the Paiute. These he brought home with him. When he reached the Great Basin, he opened the jug, and out fell the last two children. They, at once, began to fight.

The coyote kicked them apart and said to them, "You two are my children. Even though the rest got away, you two will be able to fight against the best and beat them."

Thus, the Western Shoshone and Paiutes, or the Newe and Numa peoples, who now live in California, Nevada, Idaho, Utah, and Oregon, began as allies and populated the Great Basin.