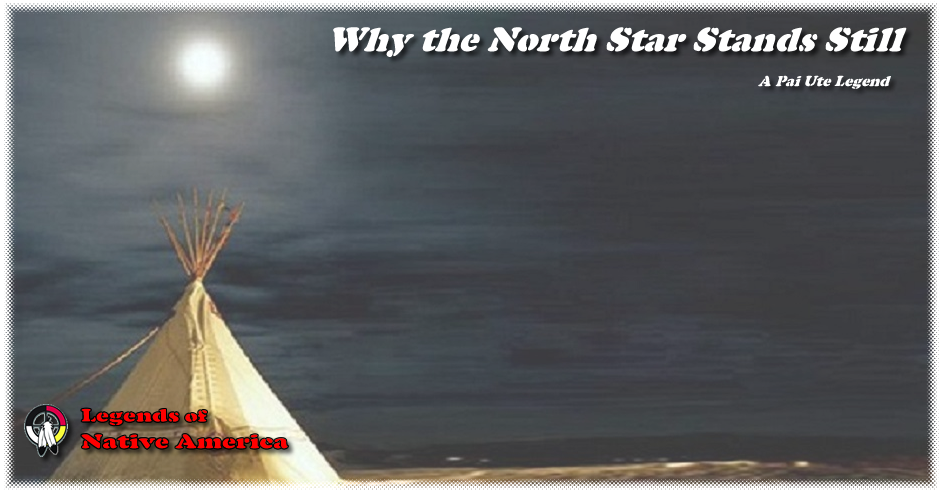 Long, long ago, when the world was young, the People of the Sky were so restless and travelled so much that they made trails in the heavens. Now, if we watch the sky all through the night, we can see which way they go.

But one star does not travel. That is the North Star. He cannot travel. He cannot move. When he was on the earth long, long ago, he was known as Na-gah, the mountain sheep, the son of Shinoh. He was brave, daring, sure-footed, and courageous. His father was so proud of him and loved him so much that he put large earrings on the sides of his head and made him look dignified, important, and commanding.

Every day, Na-gah was climbing, climbing, climbing. He hunted for the roughest and the highest mountains, climbed them, lived among them, and was happy. Once in the very long ago, he found a very high peak. Its sides were steep and smooth, and its sharp peak reached up into the clouds. Na-gah looked up and said, "I wonder what is up there. I will climb to the very highest point."

Around and around the mountain he travelled, looking for a trail. But he could find no trail. There was nothing but sheer cliffs all the way around. This was the first mountain Na-gah had ever seen that he could not climb.

He wondered and wondered what he should do. He felt sure that his father would feel ashamed of him if he knew that there was a mountain that his son could not climb. Na-gah determined that he would find a way up to its top. His father would be proud to see him standing on the top of such a peak.

Again and again he walked around the mountain, stopping now and then to peer up the steep cliff, hoping to see a crevice on which he could find footing. Again and again, he went up as far as he could, but always had to turn around and come down. At last he found a big crack in a rock that went down, not up. Down he went into it and soon found a hole that turned upward. His heart was made glad. Up and up he climbed.

Soon it became so dark that he could not see, and the cave was full of loose rocks that slipped under his feet and rolled down. Soon he heard a big, fearsome noise coming up through the shaft at the same time the rolling rocks were dashed to pieces at the bottom. In the darkness he slipped often and skinned his knees. His courage and determination began to fail. He had never before seen a place so dark and dangerous. He was afraid, and he was also very tired.

"I will go back and look again for a better place to climb," he said to himself. "I am not afraid out on the open cliffs, but this dark hole fills me with fear. I'm scared! I want to get out of here!

" But when Na-gah turned to go down, he found that the rolling rocks had closed the cave below him. He could not get down. He saw only one thing now that he could do: He must go on climbing until he came out somewhere.

After a long climb, he saw a little light, and he knew that he was coming out of the hole. "Now I am happy," he said aloud. "I am glad that I really came up through that dark hole."

Looking around him, he became almost breathless, for he found that he was on the top of a very high peak! There was scarcely room for him to turn around, and looking down from this height made him dizzy. He saw great cliffs below him, in every direction, and saw only a small place in which he could move. Nowhere on the outside could he get down, and the cave was closed on the inside..,

He ate a little grass and drank a little water that he found in the holes in the rocks. Then he felt better. He was higher than any mountain he could see and he could look down on the earth, far below him.

About this time, his father was out walking over the sky. He looked everywhere for his son, but could not find him. He called loudly, "Na-gah! Na-gah!" And his son answered him from the top of the highest cliffs. When Shinoh saw him there, he felt sorrowful, to himself, "My brave son can never come down. Always he must stay on the top of the highest mountain. He can travel and climb no more.

"I will not let my brave son die. I will turn him into a star, and he can stand there and shine where everyone can see him. He shall be a guide mark for all the living things on the earth or in the sky."

And so Na-gah became a star that every living thing can see. It is the only star that will always be found at the same place. Always he stands still. Directions are set by him. Travellers, looking up at him, can always find their way. He does not move around as the other stars do, and so he is called "the Fixed Star." And because he is in the true north all the time, our people call him Qui-am-i Wintook Poot-see. These words mean "the North Star."

Besides Na-gah, other mountain sheep are in the sky. They are called "Big Dipper" and "Little Dipper." They too have found the great mountain and have been challenged by it. They have seen Na- gah standing on its top, and they want to go on up to him.

Shinoh, the father of North Star, turned them into stars, and you may see them in the sky at the foot of the big mountain. Always they are travelling. They go around and around the mountain, seeking the trail that leads upward to Na-gah, who stands on the top. He is still the North Star.