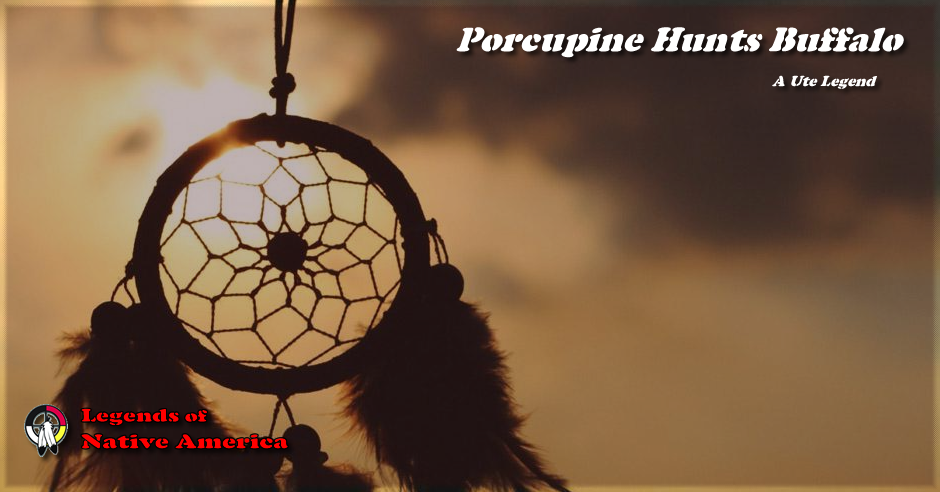 In olden days when mostly animals roamed this Earth, a Porcupine set out to track some buffalo. He asked the buffalo chips, "How long have you been here on this trail?" He kept on asking, until finally one answered, "Only lately have I been here."

From there Porcupine followed the same path. The farther he went, the fresher the tracks. He continued until he came to a river; there he saw a buffalo herd that had crossed the ford onto the other side.

"What shall I do now?" thought Porcupine as he sat down.

He called out, "Carry me across!"

One of the buffalo replied, "Do you mean me?"

Porcupine called again, "No, I want a different buffalo." Thus he rejected each member of the herd, one after another, as each asked. "Do you mean me?"

Finally the last and best one in the herd said, "I will carry you across the river." The buffalo crossed the river and said to porcupine, "Climb on my back."

Porcupine said, "No, I'm afraid I will fall off into the water."

Buffalo said, "Then climb up and ride between my horns."

"No," replied Porcupine. "I'm sure I'll slide off into the river."

Buffalo suggested many other ways to carry him, but Porcupine protested.

"Perhaps you'd rather ride inside of me?" offered the buffalo.

"Yes," said Porcupine, and let himself be swallowed by the buffalo.

"Where are we now?" asked Porcupine.

"In the middle of the river," said the buffalo.

After a little while, Porcupine asked again.

"We have nearly crossed," said the buffalo.

"Now we have emerged from the water; come out of me!"

Porcupine said, "No, not yet, go a little farther."

Soon the buffalo stopped and said, "We have gone far enough, so come out."

Then Porcupine hit the buffalo's heart with his heavy tail. The buffalo started to run, but fell down and died right there. Porcupine had killed him. Others in the herd tried to hook Porcupine, but he sat under the buffalo's ribs, where he could not be hooked. Soon the herd tired and ran on their way.

Porcupine came out and said aloud, "I wish I had something to butcher this nice big buffalo with."

Now, Coyote was sleeping nearby, and woke up and heard him. Coyote went to Porcupine and said, "Here is my knife for butchering." So they went together to the side of the buffalo.

"Let him butcher who can jump over it," said Coyote. Porcupine ran and jumped, but only partway over the buffalo. Coyote jumped over it without touching the dead animal, so he began to butcher, cutting up the buffalo.

After a little time, he handed the paunch to Porcupine and said, "Go wash it in the river, but don't eat it yet."

Porcupine took it to the river, washed it, then he bit off a piece. When Coyote saw what Porcupine had done, he became very angry with him and went after him, "I told you not to eat any of the paunch."

Coyote picked up a club and killed Porcupine and placed him beside the buffalo, and went to his home. Then he told his family, "I have killed a buffalo and I have killed a porcupine. Let us go and carry them home."

Before Porcupine had come out of the buffalo, he said magic words, "Let a red pine grow here fast." Then at once red pine began to grow under the meat and under Porcupine. It grew very tall and fast. All of the meat and Porcupine rested at the top of the red pine tree, high in the air, Porcupine magically coming alive again.

Coyote and his family arrived and were surprised that all of the meat was gone. They began to hunt for it.

Coyote said, "Throw down a piece of the neck, we are very hungry."

"Yes," they responded and took him to one side.